At last count, there were approximately 700 nonhuman primate species living in the wilds of 90 countries across the globe. In truth, just a handful of regions, including Equatorial Africa and Borneo—harbor 65 percent of all primate species. And nearly two-thirds of the primates living in those tropical hot spots are facing extinction, a staggering, but nearly ignored fact. At the heart of these numbers is Cameroon in the Western Congo Basin of Equatorial Africa. Cameroon has often been called “Africa in miniature” for how much it mirrors the continent’s incredible diversity of flora and fauna. Like the continent it calls home, Cameroon boasts a coastline, mountains, savanna, desert, and spectacular tropical rainforests across its southern region. 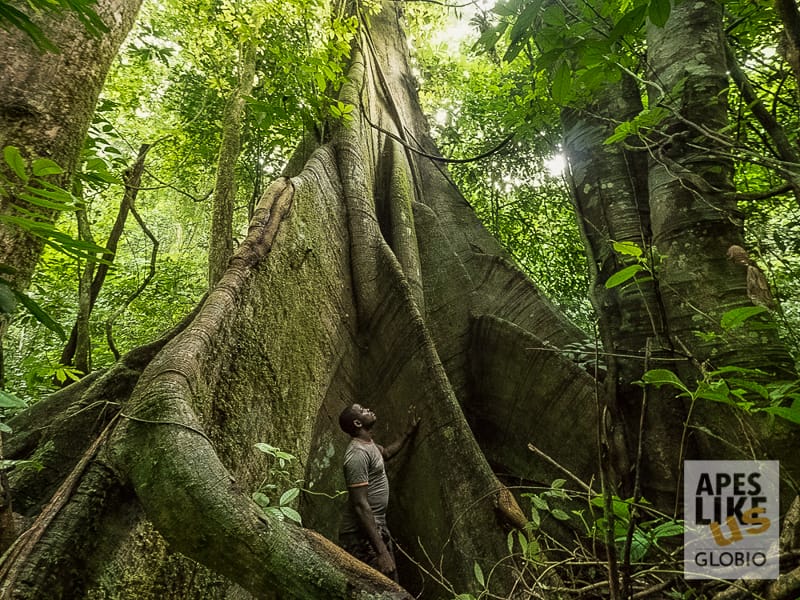 Giant rainforest buttresses like this form the core structure of one of the richest tropical rainforest regions on the African continent. Cameroonian rainforests harbor Critically Endangered Western lowland gorillas and chimpanzees among more than twenty other primates that call the country home. Securing longterm protection is a growing priority for GLOBIO’s partner in the region, Ape Africa Africa.

Last April and May as we dug into the unglamorous spreadsheet side of crafting a new strategic plan, and filled in cells of an excel file we affectionately called the “primate puzzle”, a clear picture of our planet primate predicament was emerging in the numbers — saving primates, large and small, on this planet was coming down to a quartet of key areas, areas we called Focal Regions, and the Western Congo Basin was, without a doubt, one of them. 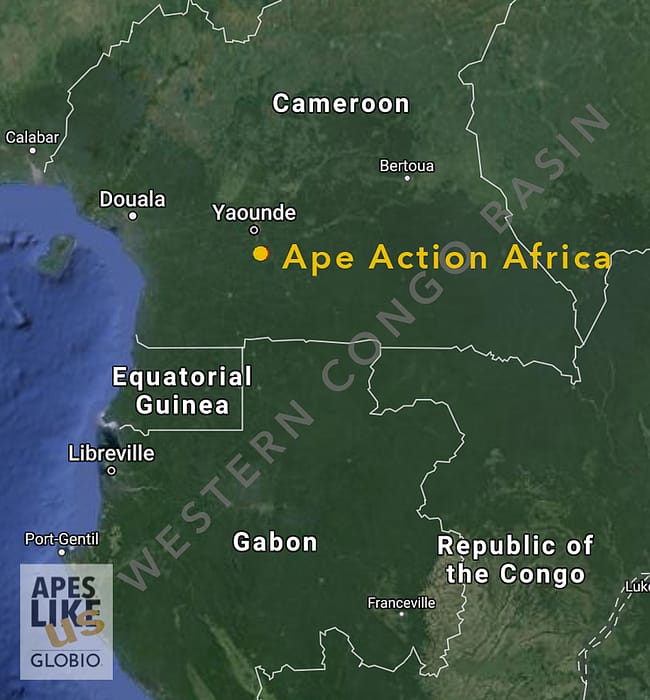 The Importance of Primates in Cameroon

Luckily, an exploratory filming trip our Executive Director Gerry Ellis made in 2015 had introduced him to the Mefou Primate Sanctuary and the primate rescue work of NGO Ape Action Africa. What he discovered hidden away in a reclaimed thousand hectares of tropical rainforest was a stunning array of primate orphans, from tiny putty-nosed guenons to breath-takingly impressive silverback Western lowland gorillas. That first encounter, and learning of the tragedy behind the nearly 300 orphan apes and monkeys compelled an annual return. The story of Ape Action Africa’s work and some of the individual primates have been shared to hundreds of thousands on our Apes Like Us YouTube channel and in publications by National Geographic and National Wildlife Federation.

From tiny putty-nosed guenons to breath-takingly impressive silverback Western lowland gorillas, the range of primates rescued and in the life-long care of Ape Action Africa represents the entire richness of Cameroon’s primate biodiversity — as well as a vivid image of the loss going on in the forests across the Western Congo Basin.

Cameroon is home to more species of primates than any country in Congo Basin. Its 22 million hectares of tropical forests are a vital part of the Congo Basin forest ecosystem. These forests provide a source of livelihoods for communities and habitat for over 9,000 plant species, about 900 bird species, and roughly 320 mammals — including the Critically Endangered Western lowland gorilla and the two subspecies of equally endangered chimpanzee. Many of the confiscated and rescued primates arriving at Mefou’s front gate come out of two key primate areas in the south of Cameroon—Dja Faunal Reserve, and Campo Ma’an National Park. Through environmental awareness and education both of these areas will be part of GLOBIO’s longterm focus in partnership with Ape Action Africa in the Focal Region.

Why are primates seemingly so predisposed to extinction?
Almost all of our primate cousins are forest dwellers, and it’s no secret that forests have had a rough go since the beginning of industrialization. Deforestation got particularly bad for primates starting in the 1970s, with the accelerated construction of roads and other infrastructure in the places where they lived, like Cameroon, a key country in the primate rich Western Congo Region.

No other primate rescue sanctuary in the world rescues, receives and cares for more great apes and primates species than Ape Action Africa. Caring for nearly 300 orphaned individuals at Mefou Primate Sanctuary, Ape Action Africa, in addition to being an open door to an ongoing flood of chimp, gorilla and monkey babies that pour in from illegal bushmeat and trafficking, has the

opportunity to play a key role in environmental awareness and education about the country’s primates and forest home. The sanctuary exists 90 minutes south of Cameroon’s capital Yaoundé, enabling Ape Action Africa access to policy-makers and 15 percent of the country’s urban population. After two decades as primarily a primate sanctuary Ape Action Africa is exploring how it can play a tipping point role in the conservation of primates and Cameroon’s vanishing tropical forests. Key to that effort will be illustrating primate importance to those who have the greatest immediate impact on their future — Cameroonian children, women, and policy-makers.

“Conservation is a complex social, economic and political issue. In addition to providing a habitat for wildlife, forests are important ecosystems and provide many resources for people. Destruction of the forest, therefore, forces people to move elsewhere for food, shelter, and jobs, leading to greater poverty and social instability. Ape Action Africa is working hard with the Cameroon government and other NGOs to help with the huge conservation effort that is needed to reverse the downward spiral in populations of Cameroon’s magnificent great apes.”

GLOBIO’s relationship with Ape Action Africa is vital in this Focal Region—the Western Congo Basin. We see it as one-third, a critical third, of a three-legged stool addressing the challenge of primate conservation in this globally important region.