by Meg at GlobioApr 10, 2020Apes Like Us, Great Ape Education, Primate of the Month

April Primate of the Month – the Proboscis Monkey

Proboscis monkeys (Nasalis larvatus) are found in each of the nations on the island of Borneo — Indonesia, Malaysia and Brunei, and are concentrated primarily in coastal areas.  There are two Proboscis subspecies: n. l. larvatus (which occupies the full range) and n. l. orientalis (generally found in North-East Kalimantan).

Their bulbous noses are their most distinguishing feature (especially on the males) and are used by males to attract females; primatologists speculate that the larger the nose, the louder their mating calls may be, which helps with reproduction.

Proboscis monkeys are some of the largest primates on Borneo, with males reaching up to 45 lbs (20 kgs)! Males and females are sexually dimorphic (i.e. physically distinct) but both sexes tend to have large, protruding bellies. This is likely due to their seasonal diets that consist largely of unripe fruit, leaves, tender shoots and other foliage. Because of their highly specialized diets, these primates are notoriously difficult to keep in captivity.

Despite their large size, proboscis monkeys are quite peaceful and will even share their home territories with other proboscis families and a number of other primate species, including: orangutans, various langurs, macaques, and tarsiers. Borneo is one of the few places in the world where so many similar primate species can peacefully occupy the same forested areas. 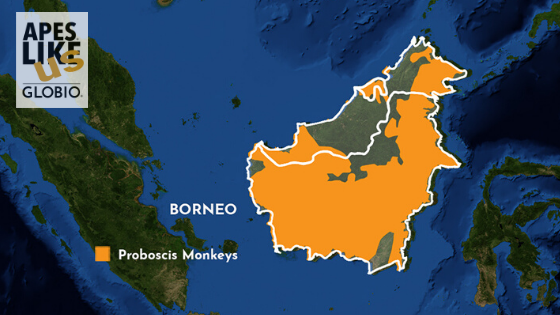 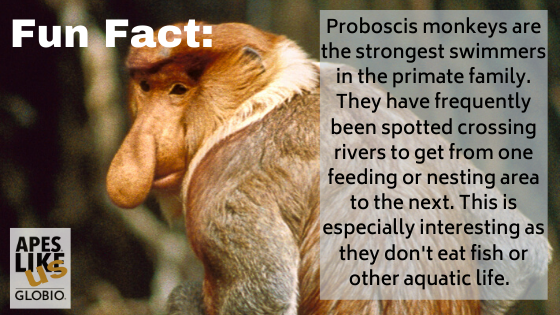 Proboscis monkeys tend to live in single male groups of up to 15 individuals. Curiously, different family groups may join at shared sleeping sites at night and travel to feeding sites in larger bands or groups. These bands may have up to 60 monkeys and are generally quite calm, with the individual families sticking close by one another. Unfortunately, their calm demeanor also puts them at risk for predation from various predators: crocodiles (and their reptilian cousin the gavial), clouded leopards, pythons, serpent eagles are all known to munch on these large monkeys.

Humans also pose a significant threat to the proboscis monkeys as they are hunted for bushmeat and traditional Chinese medicinal purposes. Rampant logging and large-scale bush fires have also greatly reduced their available habitat and fragmented current populations. Due to how difficult they are to keep alive in captivity, proboscis monkeys aren’t a popular target for the illegal pet trade. These factors combined have meant proboscis monkeys are listed as Endangered according to IUCN Redlist. Some primatologists estimate that their population has decreased by over 50% in previous decades. Despite being legally protected (to varying extents) around Borneo and through CITES, there is still much work to be done to ensure a healthy future for the species.

Don’t miss out on future Primates of the Month — Subscribe below! 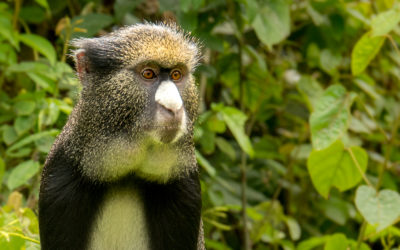 May Primate of the Month — Putty-Nosed Monkey 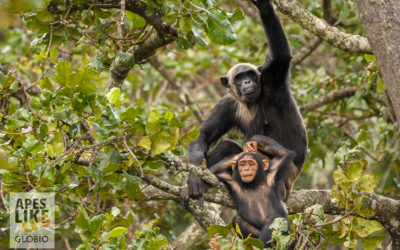 Chimp Subspecies: The Many Faces of Chimfunshi 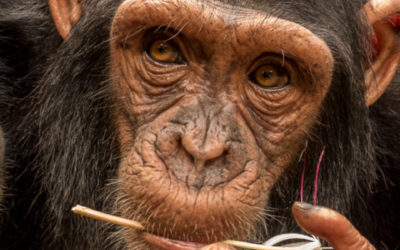