by Meg at GlobioApr 16, 2021Apes Like Us, Great Ape Education, Primate of the Month

Found only in Madagascar, lemurs are perhaps the most popular species on the island, with the Ring-Tailed Lemur being the best-known of them all! These mid-sized primates are quite common in zoos around the world and have widely become symbolic of both Madagascar and other charismatic endangered species around the world.

Look below to learn more about food, families, conservation efforts, and everything else in between! 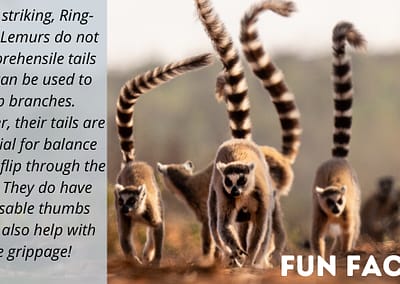 Ring-tailed lemurs are only found in southern and southwestern Madagascar. Within this region, they stick to several types of forest: continuous canopy forests, brush & scrub forests, and mixed woods, often only traveling 1000 meters in a single day if their home range provides enough food and resources. As appropriate lemur land becomes more scarce due to habitat loss for agriculture and charcoal, lemurs are forced into smaller swaths of forest. In protected areas where resources are abundant, ring-tailed lemurs can occupy the same space as up to 24 other species of lemur with ease!

Within the family Lemuridae, there is a wide variety of shapes and sizes, with ring-tailed lemurs being on the larger end of the spectrum.

Named for their distinct tails, ring-tailed lemurs boast black and white ringed non-prehensile tails up to 63 cm long (24.8 in) long. Males have body lengths of up to 46 cm (18 in) and average 2.2 kg (4.9 lbs) when full-grown. Ring-tailed lemurs have opposable toe-thumbs on their lower appendages which, combined with the balance from their tail, help with their climbing abilities as they navigate the canopies.

Ring-tailed lemurs also possess scent glands on their arms and torsos which help delineate their territory and attract mates. Males will mark their tails and wave their distinct odor around to woo the females. (Read more about “Stink Flirting” under Further Reading below!

Another special trait of strepsirrhines is the tooth-comb – where the front teeth are thin and close together, much like a human hair comb. These are used to groom fur and maintain coat health, particularly important for the meticulously clean ring-tailed lemurs.

Not quite a Monkey

Many don’t realize that lemurs aren’t quite monkeys and neither are they apes! Lemurs are actually in their own suborder with tarsiers, pottos, and lorises called Strepsirrhini primates – or wet-nosed primates. They differ from Haplorrhines (aka humans, apes, and monkeys) in a handful of ways: with a smaller brain to body ratio, reflective eyes to assist with night vision, and toothcombs to help keep them meticulously clean!

Like some of their monkey cousins, ring-tailed lemurs mate seasonally in April, usually each female mating for just a few days. Adults within a group will mate with each other during this period to maximize the chances of pregnancy, the period of which lasts 130-144 days. Females reach sexual activity at 2.5 years old, although slightly older individuals (3-4 years old) have the best chances of carrying the baby to term. The infant mortality rate is actually quite high in ring-tailed lemurs with up to 50% of babies not reaching 1 year old! Females who have previously given birth and have more experience rearing infants have lower rates of loss.

In August/September – birthing season – the newborn infants will cling to their mum’s belly as soon as they are born and will cling on for the first few weeks of life. They will suckle on mom until weaned at ~5 months old. While females have been observed caring for other’s infants, the males take no active role in raising any of the young.

Ring-tailed lemurs are quite mellow individuals that play well with others – which is partially why they are so popular in zoos around the world. Given ample space and resources, these lemurs will naturally form groups of up to 30 individuals, with the females sticking in their natal group their entire lives. Adult male lemurs will shift between groups every few years to promote genetic diversity.

Like other primates, ring-tailed lemurs are hierarchical, with females reigning higher than the males! Males will gain or lose rank according to their health, age, and the number of other males in the group. Females often establish their standing at young ages and don’t necessarily inherit their mother’s rank (as is common with many other matriline primates).

Males will display and scuffle with others during mating season – especially if they are new to the group and looking to establish themselves. Mating season is typically that with the most aggression during the year, although threats and aggressive postures are often symbolic and don’t lead to bloodshed.

Ring-tailed lemur troops may have squabbles with neighboring troops over land and resources – especially during the dry season when fruits are limited. During these altercations, the females take charge and defend their troops and territory against the aggressors.

Observational research has indicated that despite their apparent similarities in social structure to similarly-sized monkeys, ring-tailed lemurs do not possess the same level of social complexity.

Ring-tailed lemurs are adaptable snackers – eating a wide range of foods based on the season and forest type. Their diet includes fruits, leaves, flowers, resins/gums, insects, and small birds. One key component to their diet is the tamarind tree which offers fruit, leaves, and shelter!

Auditory and olfactory communication are both vital to ring-tailed lemurs to strengthen troop cohesion and remain safe.

Ring-tailed lemurs can be quite the “Chatty Kathys” and boast a wide variety of purrs, calls, alarms, and chatter. Vocalizations are used to alert the troop to danger and for bonding within individuals.

Like other strepsirrhines, scent communication is perhaps even more vital for communication. Males and females possess scent glands on their chest, arms, and around their genitals. Males will brush different scents on their tails and wave them around depending on the context – to ward off competing males (aka “Stink Fighting”) or to attract females for breeding

Females will also urine mark on trees – especially on the periphery of their territories.

Outside of humans, ring-tailed lemurs have a handful of natural predators – including native raptors, civets, fossas, and snakes.

Lemurs, on the whole, are not doing well, with the IUCN estimating that 103 of 107 lemur species are threatened, and 33 of which are critically endangered as of a 2020 report, These disparaging numbers are – just like other primates – vastly due to human encroachment and habitat loss.

Ring-tailed lemurs in particular are facing the situation where there are suspected to be equal or more individuals in captivity (2,000+) than there are in the wild (~2,000 according to a 2017 study). High infant mortality rates, coupled with habitat loss and hunting for the illegal pet trade all play a role in the species’ demise, with the population decreasing by 95%  since 2000 according to population studies from 2017. This is largely due to an estimated 90% of Madagascan forest lost and the land now being used for agriculture, livestock, and to cater to other human needs.

Despite their dire situation, all hope is not lost for Madagascar’s most popular primate! A number of conservation efforts – both within Madagascar and abroad are underway to help keep ring-tailed lemurs away from extinction.

Another key to their survival is their popularity in zoos. Zoos with effective breeding programs can educate children and adults alike around the world about these striped strepsirrhines and gather funding to support conservation in the wild. As with apes, their popularity can help drive efforts for their protection. Other research and sanctuaries, such as the Duke Lemur Center in North Carolina, are critical to learning more about this stunning species and educating the public on their behalf, while also supporting on-the-ground conservation efforts.

The IUCN is also involved in conservation by highlighting the threats lemurs face and working with different Madagascan groups to increase local protection. Lemurs are classified as endangered under IUCN Redlist guidelines and are listed under Appendix 1 of CITES, making illegal all trade and capture of wild-caught animals (individuals bred in captivity such as with zoos are under different restrictions).

Eco-tourism is a major opportunity to incentivize the protection and survival of ring-tailed lemurs. Capitalizing on the popularity of these beloved lemurs can increase shift local livelihood away from consumptive practices and towards protection to ensure populations remain.

Nearly one-third of all Lemurs are Critically Endangered – IUCN Report

“Stink-Flirting is a thing – just ask a ring-tailed lemur”