by Meg at GlobioAug 14, 2020Apes Like Us, Great Ape Education, Primate of the Month

As one of the most critically endangered apes, with fewer than 14,000 individuals remaining in the wild (as of 2016 estimates), the Sumatran orangutan (Pongo abelii) is a significant piece of the lush Sumatran biodiversity and greater Indonesian culture. These regal red apes face a variety of threats – particularly with habitat destruction through logging and oil palm plantations.

There’s so much to learn about these amazing apes, read more below to discover it all! And, if you haven’t already, sign up for our Primate of the Month and never miss a monkey! 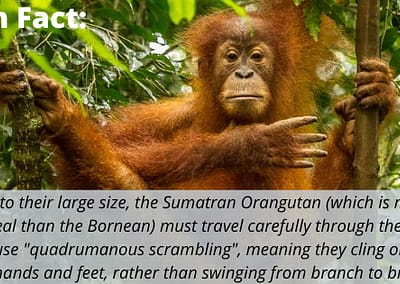 Sumatran orangutans are found in – you guessed it – Sumatra, one of the islands belonging to Indonesia. These gorgeous great apes are located in the northern end of the island, geographically isolated from the Tapanuli orangutans which are found further south. The Sumatran Orangutans prefer the island’s lush tropical rainforests, particularly in and around the Leuser Ecosystem.

Because of their reliance on trees for food, shelter (especially coupled with their size!), and transportation purposes, Sumatran orangutans thrive in dense, old-growth forests.

Fossils indicate that orangutans were once found throughout Southeast Asia and Southern China. Today, however, the three species of Orangutans can only be found on the islands of Borneo and Sumatra.

Orangutans are the most sexually dimorphic of the great apes – meaning that there are remarkable physical differences between adult males and females. Dominant males may reach up to 200 lbs (90 kg), with females tending to cap at 110 lbs (50 kg).

Sumatra orangutans are paler in fur color than Bornean orangutans and tend to have longer hair and faces. Sumatra orangutans also have incredibly long arms and strong grip strength to help them maintain their spot in the trees. Orangutans, in general, are very strong, able to lift up to 500 lbs (240 kg) – which comes in handy as they move their large bodies through the canopy.

Males will develop their characteristic cheek pads or flanges when they reach sexual maturity, although these flanges may take years to develop and are highly contingent on testosterone levels. For this reason, the larger flanges are more attractive to the females for mating purposes.

Sumatra boasts a wealth of biodiversity, providing Sumatran orangutans with an abundance of food quantity and variety. Their favorites? Fruit of course!

Being such intelligent creatures, orangutans become acutely familiar with their territory and will venture to specific areas and trees to forage for fruits and leaves as they ripen. In addition to the hundreds of plant species they consume for food, they will also consume certain plants for medicinal purposes – especially for pain relief or anti-parasitic qualities.

Figs, durian, and other fruits make up the bulk of orangutan diets on Sumatra. Every 2-10 years, the fruiting cycles of their local plants will coincide, resulting in an absolute abundance of fruits ripe for the picking! These occurrences are called “Mast Years”, during which time it’s common to see multiple individuals peacefully foraging from the same trees or areas, and also leads to a marked increase in breeding events.

In low fruiting seasons, Sumatran orangutans have been rarely observed hunting and eating small Slow Lorises. However, this behavior has only been noted when other food sources are very scarce, indicating that eating meat is a contingency event.

Because of their frutarian habits, Sumatran orangutans are important seed disperses, and help keep local biodiversity strong but passing a variety of seeds through their feces.

Even though Chimps often get the spotlight for their smarts, it’s actually the Orangutans that are the most intelligent of the (non-human) apes! They have distinct problem-solving capabilities, which are necessary for their generally solitary lives.

While individual adults will stick to their particular territory, there is often significant overlap between territories, especially with dominant males and females, meaning that several individuals may well be found foraging from the same feeding areas at the same time with little aggression. Sumatran orangutans are quite amiable and generally non-aggressive. They do, however, tend to shy away from humans, giving them the nickname “the mysterious apes”. Sometimes younger males may be more curious and circulate in the outskirts of smaller local villages or sneak crops, but this is fairly unusual.

Between feeding times is naptime! Unlike Bornean orangutans, Sumatran orangutans will construct quick and simple nests for these shorter rests, and larger, sturdier nests for overnight sleeping. They have even been observed creating roof shelters out of leaves and branches in the event of storms and inclement weather.

Orangutans rely less on vocal communication than other primates, although it does play a role in mothering and building friendships between females. Dominant males will often perform “long calls” to ward off younger males from their territory and to attract females for mating purposes. During conflicts with a rival male, the dominant will also throw, shake, and bend trees and branches to demonstrate strength and might!

Females are generally quite friendly with each other, with the young females being particularly affiliative with the males. Infants will squeak, groan, and whine to get their mothers’ attention, and the moms will often use unique noises to calm their young.

Unlike other apes, adult Orangutans are generally solitary, save for mating periods, or when a mother is caring for her young offspring. The females do, however, often have overlap with other females and the local dominant male.

When wild female orangutans come into contact in their territory, they are often quite amicable, especially when fruit and other foods are abundant. Dominant males, however, will chase off the younger males, particularly if they are badgering the females to mate. Sumatran orangutans are more social than  their Bornean counterparts, although they do generally spend the majority of their time alone – unless they are caring for their young.

Sumatran orangutan females tend to be very dedicated mums and will care for their young for up to 8-9 years! Because orangutans tend to be more solitary, the mother must teach her young how to fend for themself in the wild – from nest creation to toxic plant avoidance.

In orangutans, females as young as 12 will mate with the dominant male in the territory, with pregnancy lasting  7.5-9 months. Generally, females will only give birth to one infant at a time (twins are very rare!) and will often go 4-5 years before having her next infant. Males do not often take on a parenting role.

Sumatran orangutans, like the other two species, are listed as Critically Endangered according to IUCN Redlist standards. With fewer than 14,000 remaining in the wild (as of 2016 estimates), conservation efforts must be ramped up to give them a fighting chance at survival. It is currently illegal to hunt, kill, wound, capture or trade all orangutans – both through CITES and through local ordinances. These legal protections, however, have not proved wholly effective at mitigating crime and population decrease.

As with much of the primate world, human activity and encroachment is the greatest driving force behind their critically endangered status. All three orangutan species face similar threats with oil palm plantations around Borneo and Sumatra. With logging of precious Sumatran timber at an all time high, this reduces the amount of viable forest available for the red apes, and further fragments what remains. This makes it difficult for individuals to travel to their historic feeding grounds and also decreases the chances of them encountering one another for mating purposes.

While less common than with African apes, Sumatran orangutan mothers are occassionally hunted and killed, with their infants taken for the illegal pet trade. There di exist several wildlife sanctuaries and rescue facilities for infants that are rescued from the pet trade.

In addition to their human threats, Sumatran Orangutans must also be cautious of Sumatran Tigers, Clouded Leopards, Pythons, and Crocodiles – especially the younger primates! However, due to the rarity of predation (especially from the felines), it is much more common that these orangutans will come into conflict with humans over the others.

Conservation and the Human Community

Conservation initiatives for all orangutans must be undertaken at various levels and include a variety of stakeholders – especially local communities, palm oil conglomerates, government officials.

For individual Sumatran orangutans who are rescued, there are several organizations who are able to rehabilitate and later release healthy individuals back into the wild. As orangutans are solitary creatures, these releases are less complicated than their African ape counterparts, but are necessary to keep genetic diversity within natal regions. More local efforts to reforest corridors between fragemented areas are also arising to give their precious local orangutans the opportunities to venture to new areas, or forest patches that had been previously blocked off.

Increasingly more community-based initiatives are coming to fruition, where communities self-police and monitor their local forests for illegal poaching and logging activities. Increased eco-tourism also helps incentivize environmentally friendly practices at a local level as tourists help stimulate local economies. However, given the present climate and orangutans’ likely suscepitibility to Covid-19, tourism is currently at a standstill.

Orangutan Outreach, a nonprofit working to support a number of in situ conservation efforts: https://redapes.org/about-orangutans/

How will Palm Oil affect Diversity?