Bienvenidos to Biodiversity | a GLOBIO Adventure 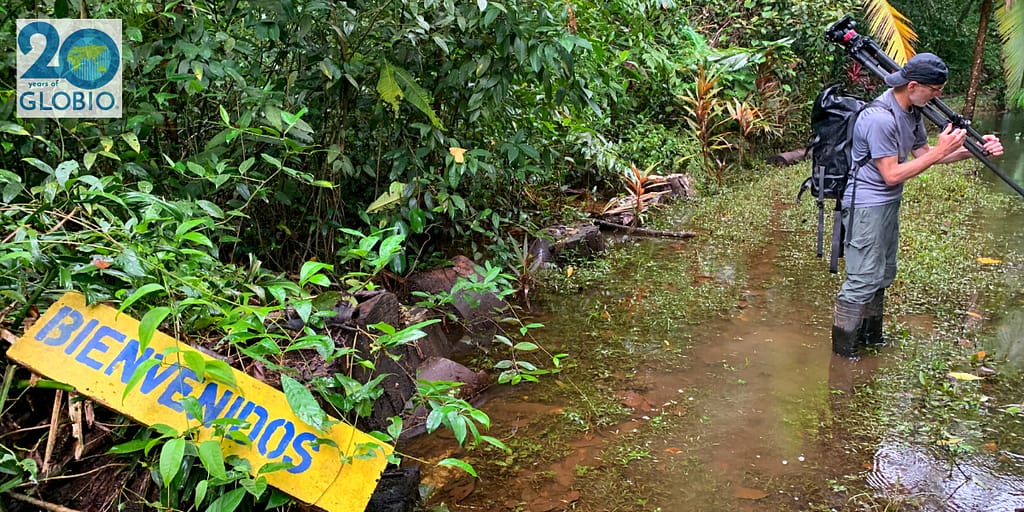 Bienvenidos to Biodiversity | a GLOBIO Adventure

Sitting in the airport and replaying the last nearly two weeks of Costa Rica exploration behind the camera lens – did we get enough? Should we have headed to North camp one more time? How on earth can we overcome weather issues for future trips? And most importantly, did we see enough primates to tide us over until our next GLOBIO adventure to the forest?

Our objectives for this trip were multi-faceted: to gather new educational footage to craft future Apes Like Us primate awareness pieces, to dust off our filming skills after nearly two years of being stuck stateside due to the pandemic, to establish a rhythm and routine for future filming trips, to get Gerry back into the tropics, and much more. Our mission behind all of this was simple: to experience all monkeys, all the time. 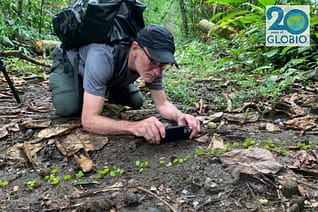 To say this trip was eye-opening for me as a relative filming newbie is an understatement. During the last couple of weeks, I was able to experience not only a new realm of biodiversity (my first trip to Central America!) but also Gerry Ellis (Gerry ellis) behind the lens, with his intense focus that only 40+ years of wildlife photography can cultivate. This was a crash course in wildlife filmography at its finest: how to get the best possible footage of moving targets (monkeys) in non-ideal rainforest lighting while dealing with hurricane caliber rains, tropical humidity, and all the mosquitos one could ever want in life. Each camera shot was taken with a number of questions floating in my mind “What can humans learn about the monkeys from this scene? How can I use this camera to best capture what I see before me? What videos and educational pieces can this be used for?” and more and more.

Often called “a belly with 5 limbs”, Spider monkeys make great use of their prehensile tails to swing, hang, and grab fruits and leaves in the upper forest canopy.

Our first day at the Pacuare Reserve, run by nonprofit Ecology Project International was a good indication of what was to follow through our trip: tromping up and down the trail connecting the 6 km path between the North and South research stations, with a variety of camera gear in tow, encountering a slew of wildlife along the way. Lizards galore, constant traffic of Black Vultures (Coragyps atratus) through the skies, and Geoffrey’s Spider monkeys (Ateles geoffroyi) launching branches and monkey insults at us from the upper canopy, all interspersed with the frequent downpours. By breakfast on the first day, we had the amazing fortune to see each of the three local monkey species – mischievous White-Face Capuchins (Cebus imitator), the even-tempered and quasi-Gorilla-esque Mantled Howler monkeys (Alouatta palliata), and the aforementioned ornery Spider monkeys, as well as the largest Agami Heron (Agamia agami) Rookery in the world. I could hardly contain my joy and excitement at seeing these beautiful beasts in the wild for my first time (ok, ok, I couldn’t quite contain it, eliciting chuckles from my two trail-buddies Gerry and Claudio).

The days that followed were wet. Like, really wet. Like rubber boots getting stuck in the mud and pulling through with an evocative shhhlllluuuuuck sound at each step. Evening thunderstorms rolled into morning torrential downpours which evolved into afternoon showers. Claudio, our de-facto guide and longtime researcher at Pacuare, defined the different areas of local forest as “Rainforest” and “Wet Forest”, with the former surrounding us in our bungalow at the South camp, and the latter in the lush primary forest of North camp. Each type had its own distinct feel and personality. Through our numerous treks through the trail, Gerry and I quickly got a feel for the nuance and evolution of the trek – juveniles capuchins would often hang out at this palm tree around lunchtime, this other patch of trees offered the best sloth sightings, keep an eye out for the delightfully eccentric Great Curassow bird (Crax rubra) around here… We spent our days darting out in the sunny spells or whenever someone notified us of a monkey sighting nearby, riding that fine line between keeping the gear spread out to dry and being packed and ready to jump up at a moment’s notice. As Gerry commented at one point “it’s like a damn fire drill!” as we pulled on our rubber boots and ran to the forest to spot some Howlers.

Released with their nestmates, these baby Leatherback turtles head off the beach into the vastness of the Caribbean Sea.

One unexpected delight of our time at Pacuare was being introduced to their renowned Sea Turtle Conservation program. Located along the coastline of the Caribbean Sea, Pacuare’s beaches are popular nesting sites for several species of sea turtle: Leatherbacks (Dermochelys coriacea), Hawksbills (Eretmochelys imbricata), and the occasional Green Sea Turtle (Chelonia mydas). During nesting season, their researchers and research assistants conduct nightly surveys of nesting mommas on the beach and then carefully relocate the 80-100 or so eggs to controlled areas, away from fly larvae, beach crabs, humans, and other beasts looking to poach these protein-packed nests. With only 1 in 1,000 embryos ever reaching sexual maturity, the researchers’ critical work helps boost those odds and give the ~40-gram sea turtle babes a much better shot at survival. The group of international researchers and their assistants also looked at all aspects of the nesting scenario – oxygen levels in the sand, the microbiome of the eggshells, etc, to help increase these odds even further. Gerry and I were able to witness and capture the release of 3 nests to the Caribbean Sea. More on this species boosting work in a future post – along with a video of these babes making their way across the beach into the waters. Pacuare old-timers like Claudio and Haji will be keeping an eye out to see if any of the little ones released before us will make it back to nest in 12 years when they’ve reached that level in their maturity.

Eastward to the Pacific!

Small and bouncy, catching sight of a squirrel monkey NOT moving was a rare treat indeed!

After a week and some change at Pacuare Reserve, Gerry and I packed up our damp gear (yes, at this point we both smelled *fantastic*) and heading to the other coast along the Pacific Side to spend a couple of days searching for Central-American Squirrel Monkeys (Saimiri oerstedii) the smallest and most gregarious of the Costa Rican primates around Manuel Antonio National Park near Quepos. This portion was short, sweet, and chock-full of the little golden fellows. Our guide, Alex, had an encyclopedic knowledge of Costa Rican flora and fauna and tapped into everyone in his local network to help us locate elusive troops of the Squirrel monkeys. I gotta say, for being so darn tough to find, squirrel monkeys would make terrible ninjas. With troops of 20-100+ members, these little guys come crashing through the foliage, leaping like flying fish and chattering away like old ladies at Bingo. Their birdlike chirps have aptly earned them the name “Titi” monkeys in Spanish.

Here in Manuel Antonio, the monkeys – while equally amazing – acted so differently to those in Pacuare. With Manuel Antonio being the most visited national park in the country (upwards of 3,500 visitors a day!) the primates here (the Capuchins particularly!) were well used to human presence and didn’t shy away from putting on a show or getting perhaps a little too close to the nosy tourists. Seeing the humans react to the monkeys was just as fascinating as the inverse, and if nothing else, only spurred on our GLOBIO mission further to create better public awareness about just how special, critical, and sometimes dangerous they can be.

White-Faced Capuchins are known for their dexterity and have been spotted countless times opening backpacks and rummaging for human snacks and treats.

Back Home in One Piece

This trip seemed to last forever while also simultaneously fly by. The time waiting out the storms dragged on and on, but once we had cameras in our hands and a monkey in our eye line, time just stopped. On our final morning in Manuel Antonio, we spent nearly three hours following one troop of squirrel monkeys through the massive property of a local hotel.

Our next few weeks will be spent combing through our thousands of video clips, culling out the chaff, and seeing what gems we managed to capture, coming up with new educational pieces to highlight the amazing sights we shot. In the end, did we get enough footage? Probably not, always pushed to get more. Could we ever get enough of this amazing biodiversity? Definitely not.