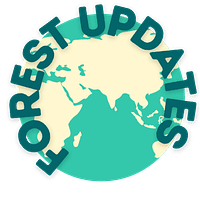 Last Friday, Gerry and I got back from an absolute blur of a couple of days visiting Tacugama’s most recently launched program site – Outamba Kilimi National Park. Now, Gerry may blame the travel delays on me because apparently doing an excited little dance and saying I was ready for adventure is the same as tempting fate…we’re agreeing to disagree on that front. But anyway…here’s the tale:

The team – Bala, Aram, Paul, Bokori, Naomi, Leeon, Gerry, and myself (along with two drivers and a couple of other folks we picked up along the way) were joined by Isatu Harrison, a brilliant Sierra Leonean Fashion Designer and supporter of Tacugama, who hails from a town just outside the park. We set off bright and early on Wednesday morning in the two cars, packed in with enough gear and hopefully ginger nut biscuits – to tide us through the next 48+ hours.

The first few hours through Waterloo and to Makeni were smooth sailing. Leaving the green ridges of the Western Hills for something a little flatter, we stopped for a quick bite here, picking up some local cashews for a snack there. And then we turned off the tar road and things got a touch bumpier. After another solid few hours, we reached Kamakwie Number 1 (of three) to visit Isatu’s uncle’s home for lunch. At this point, Gerry and I swapped vehicles to head straight to the park with the Tacugama Outreach crew. 14 kilometers took about 90 minutes with the rough roads and a brief trip on the river ferry. Finally, as twilight settled, we reached the park headquarters and made camp for the night to ready for the main event the following morning.

The forest, lush and dense, faces threats from all sides with logging, mining, and the bushmeat trade. Tacugama’s collaborative programs aim to address each of these issues to find sustainable alternatives.

A Bit about the Park

Outamba Kilimi, a set of 2 forests within designated national park boundaries, is “upline” (i.e. to the north) on the board with Guinea. These forests are critical strongholds for the Western Chimpanzees, as well as forest elephants, hippos, rare bongo antelope, sooty mangabeys, and other endemic species. Tacugama, with support from the European Union, is crafting a handful of livelihood, environmental education, and eco-guard initiatives around OKNP to safeguard the forests before they fall to the timber and mining companies. This trip was the official launch of these plans, presenting them to the local Paramount Chiefs, village elders, and community members for their support and feedback.

As of writing this, there is a temporary moratorium on all logging throughout Sierra Leone, ostensibly as a sign of environmental care from President Bio. This meant that the Rosewood timber cut prior to the moratorium lay in large piles along the roads awaiting transportation, presumably to China, whose appetite for this particular tree is voracious. Reading about deforestation is one thing, but seeing the aftermath is sobering. While on a diverted road through the forest, we came upon a rather beat-up truck with a half dozen or so young men and even more logs. Illegal to be sure.

The next morning, an early wake-up to grab some drone footage of the park, then a quick drive to the nearest large town of Fintonia. A sprawling village, tired around the edges, houses built of mudstone. In the last few years, because of the logging, the town has expanded rapidly like many other nearby frontier towns. Reaching the church where the meeting was to be held and what do we find? The largest pile of timber yet. Maybe ~1,5000-2,000 logs lay between the church and the three village schools. A sobering sight indeed.

After some time, and much discourse, the meeting commenced. With representation from the National Protected Area Authority (NPAA), the EU, Tacugama, and other neighboring communities, the church began to fill and fill and fill with community members. Speeches from each of the representatives (mainly in Krio and then translated line by line to Susu) were followed by an open floor for comments from the community. While excited at the prospect, many shared their experiences from countless NGOs who had stepped in previously with big promises of community benefit but no delivery. This is where Tacugama differs. They aren’t planning 2- or 3-year projects on the funders’ behalf and then walking away, but rather looking to inspire long-term, sustainable, change for the community’s benefit to complement protecting the remaining forests, and they have a track record to prove it.

What’s better than one stuck truck? A stuck cruiser to boot! Luckily the guys dug these out, while Isatu and I supervised of course 😉

The meeting, lasting about 4 hours, was a solid step in the right direction to getting started. Around 4pm, The crowd dispersed outside and we set off on the long road home. Joining us on the car ride back was master storyteller Usifu Jalloh, Kamikwie native, and world traveler, carrying out workshops and encouraging audiences of all ages to partake in his stories and to share their own. To say this man is a character is an understatement. He has a warmth and charisma that can light up the room and he certainly kept us entertained on the ride back, even getting the ferry operators singing and partaking in his tale.

Crossing the ferry back, a rather intimidating storm began to whip up. The downpour began and the roads muddied. We came up a large camion truck, axel deep in mud coming towards us up a hill. Stuck. Sitting in the car, while the rains poured down outside and the windows fogged up, I couldn’t help but have flashbacks to Jurassic Park where they too are stuck in the tropical storm. Mercifully, our own story had significantly fewer dinosaurs. While trying to pass, we too got stuck until the EU representative Giancarlo drove up and towed us free. After nearly 2 hours of the drivers and road workers digging, the truck was dislodged and we headed off again. Two hours later and we are finally on the road again, stopping for fresh Poyo (palm wine) thanks to Usifu and roasted street corn. Bumpy bumpy bumpy but spirits remain high.

By 10:30 pm we were finally off the dirt track and back on the tarred road… only to be stopped again after a couple of hours with a flat tire. Do either of the two spares in the car fit? Nope. The driver, Mr. Ba, takes the flat with him and a taxi driver for repair in Makeni, about an hour away. While waiting outside and admiring the sky full of stars, another whip of wind and the drops begin to fall. We all load back into the jacked-up vehicle as steady as a surgeon and wait for driver Mr. Ba’s return as another torrential downpour carries on. We fended up rolling into the sanctuary around 4 am on Friday morning, just a tad later than anticipated.

Well, with this post getting as long as the trip itself, it’s time to get packing for our next set off bright and early tomorrow morning to Loma Mountain National Park. While I won’t go asking for any adventure this time around, we’ll see what sort of excitement finds us. Stay tuned for updates…