Where is Gerry now?

Now I find myself back in Zambia, at the end of the Copperbelt. A desolated piece of Earth robbed of virtually all life by the greed of a world desperate for copper. Copper for everything from electrical wires, and cooking pots, to electronics and smart phones. Not the sort of place I would list as an Apes Like Us kind of place. But at the end of this mess Chimfunshi Wildlife Orphanage. It dangles like an oasis of life along the Kafue River. It’s also an oasis for over 130 chimpanzees the world was prepared to neglect and discard, all but the open heart of Sheila Siddle.

I came here once, a couple of years ago, thinking that was it: One month, film 24/7 for 30 days and create a short film for Apes Like Us 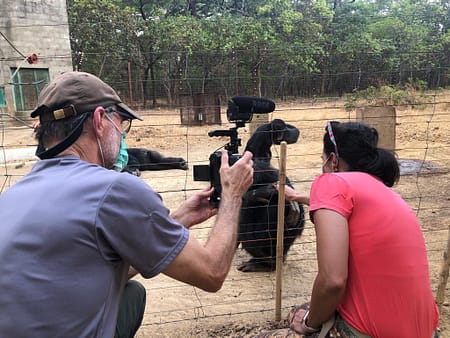 about this odd expat chimp sanctuary, in a place where there are no native chimps. It was punctuated by a life and near death drama of a tiny newborn chimp named Little Joey, in the hands of vet Thalita Calvi. Even more fascinating were the lives and trajectories of these two women, Sheila and Thalita, in this place. One of whom symbolizes much about the world of apes we have come from, the other the world of apes we are moving into. It’s a story I have been trying to find a way to tell the past few years. In so many ways it is the story of great ape survival.

So back, once again, in Chimfunshi, this time with co-producer Tracy MacDonald working on a version of the documentary film we start a year ago — Before They’re Gone (working title). Trying to tell a story about apes, about a place, and about inspirational lives. Two extraordinary women on a journey we all should be a part of if great apes are to survive on this planet.

Where is Gerry now? Not where I thought I would be if you’d asked me a couple years ago. Yet, maybe exactly where I should be. Years ago I lived for a short time with traditional Australian aboriginal people. I filmed them crafting and throwing boomerangs. If boomerangs are well tossed they fly out into the world and return with a new view, and are ready to be tossed again. I was told, “each toss ‘dis pella, come a new look.” If I have learned one thing, after 30 years of traveling this planet nonstop, it’s that boomerang places are real, returning is to ‘come a new look’ .