The 2021 launch of the Chimpanzee National Animal Awareness and Protection Campaign (CNAAPC) marks the debut of one of GLOBIO’s more ambitious collaborations yet. This grassroots campaign seeks to engage Sierra Leoneans of all backgrounds in the understanding and protection of their new National Animal – the Western Chimpanzee, using the decades of work and achievement from Tacugama Chimpanzee Sanctuary on behalf of the treasured ape.

As a result of the efforts made by Tacugama, in 2019 the government of Sierra Leone declared the Chimpanzee as the National Animal and the face of tourism of Sierra Leone – the first country in the world to elevate a great ape to such high standing. “If this decline continues, 99% of the remaining population will be lost by 2060.” – a worrying prospect to be sure. At the end of 2021, Tacugama Community Outreach Team surveyed a number of Sierra Leoneans around Freetown to gauge awareness about the chimpanzee and measure existing attitudes towards the ape. These largely demonstrated that the majority of those polled are unaware of the Western Chimpanzee’s status as National Animal but there was an overall consensus that they are protected and that it is indeed illegal to keep chimpanzees as pets. 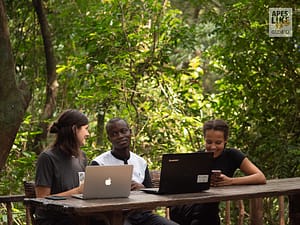 One of the key aims of this campaign is to spark discourse. Surveys conducted by Tacugama staff and volunteers demonstrate that a majority of Sierra Leoneans in Freetown are unaware that the Chimpanzee is the National Animal, nor that there exist a number of laws protecting chimpanzees, outdated as these laws may be. By creating more awareness about how dire the situation is for chimps, Tacugama can create further momentum to renovate these laws and provide more holistic protection for the chimps and their forest homes, a significant component of Tacugama’s work in-country.

For this campaign to be successful, two critical messages have to be conveyed:

1) That the Western Chimpanzee is a Keystone Species, meaning that they play a leading role in maintaining the health of their forest surroundings (largely through seed dispersal) and that survival of the Western Chimpanzee is inexorably linked to forest health, mitigating climate change, maintaining access to clean water catchments, preserving sustainable indigenous livelihoods, prevention of disease transmission, and so much more.

2) That ensuring the survival of the Western Chimpanzee within Sierra Leone is well within the country’s financial interests, especially to attract significant international investment to construct a viable Eco-tourism circuit highlighting some of Sierra Leone’s unique tourist destinations.

Word Cloud of survey responses from Freetowners. Curtesy of Tacugama

Tacugama’s Survey results demonstrated that chimpanzees are associated with the gambit of traits – from intelligence to aggression. Identifying these associations prior to the campaign is integral to crafting an outreach strategy that really speaks to and with Sierra Leoneans. The chimpanzee indeed has many traits that mirror that of Sierra Leone – intelligence, strength, and above all, resilience. It’s up to us all to help frame the narrative to highlight these key traits and help spark a sense of national pride behind their National Animal.

So what will this campaign look like? How can we reach over 8 million people in a meaningful way?

Sparking the conversation is key and the plan to do this is by implementing a multi-tiered outreach strategy – reaching radio, news outlets, television programming, and social media, complemented by billboards and posters around Freetown to inform and engage about various aspects of protecting chimpanzees. Tacugama’s outreach team is a mix of Sierra Leonean and International staff, each of whom plays a huge part in the campaign, will craft media from Sierra Leoneans speaking to Sierra Leoneans. These media pieces will coincide with additional activities in schools with their Tacugama Kids Environmental Education Program (TKEEP) and Roots and Shoots collaborations with local youth groups. Now that the sanctuary is open to visitors again, the next few months will also bring local youth groups and other collaborating organizations around Freetown to see first hand the work that Tacugama is doing on behalf of the chimps! A number of local celebrities are also big fans of Tacugama and have pledged to join the campaign to help spread the word!

Perhaps the main and most exciting event of Year 1 of the campaign is Chimp Week in May! This week of events, workshops, activities, and more will take place around Freetown, collaborating with a number of local international agencies and nonprofits to kick start in-person celebrations of the Western Chimpanzee! More on Chimp Week in an upcoming post!

Out of this campaign, we hope to see a national shift in attitudes and understanding of the Western Chimpanzee that translate to changes in behavior. Already in the last few years, Tacugama has taken in a number orphaned young chimps kept as pets, many of whom were willingly handed over when the humans keeping them (illegally) learned about Tacugama and why chimps don’t belong as pets. As the first country in the world to name a great ape as their national symbol, there’s also enormous potential for Sierra Leone, with Tacugama and GLOBIO’s lead, to set the stage for other countries to follow suite and craft multi-faceted initiatives to uplift their own apes and mega-fauna. Much of this whole endeavor is modeled after Rwanda’s embracing of the Mountain Gorilla, as they’ve worked hard to create national love and appreciation, as well as on-the-ground protection for their own apes. One thing is for sure – this change won’t happen overnight, hence the need for a full-scale campaign with constant assessment and evaluation to ensure we’re still on the right path.

As an organization focused on spreading awareness about environmental issues, the Chimpanzee National Animal Awareness & Protection Campaign is an exciting opportunity to reach populations who have a direct hand in protecting the apes in their communities. Thus far, we have had a hand in crafting the overall strategy – particularly the year ahead, assisting with media materials, and sourcing funding for various aspects of the campaign. During our stay in Sierra Leone, Gerry crafted the video below with the amazing Usifu Jalloh, Sierra Leonean storyteller and national treasure, to help garner support for the campaign amongst local diplomats, NGOs and other investors. This endeavor is sure to expand and evolve as the days pass and new outreach opportunities arise and we are excited to see it take shape, especially in the early months of the campaign!

Megan Stark is GLOBIO’s  former Programs Director, we appreciate her posting this final blog recapping the 2021 launch of the CNAAPC.