Chimp Subspecies: The Many Faces of Chimfunshi

Encountering your first wild chimpanzee cements in your memory an image about what a chimp is and looks like. For me, that was chimpanzees at Gombe Stream National Park on the sandy shore of Lake Tanganyika, Tanzania. In 1989 I was a naïve wannabe wildlife photographer who had stumbled luckily into the most famous great ape research site in the world with the most famous researcher, Dr. Jane Goodall. That was it. That was where chimps live and that was what they looked like, and that was how they behaved — cemented. 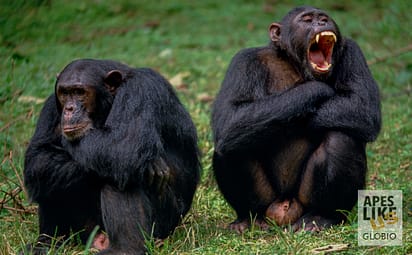 That was until Jane pushed me out the metaphorical front door and suggested I go see apes in other places. That journey has taken me up rivers and down dirt roads, along footpaths, through rainforests and savannahs across Equatorial Africa. Chimps have been an amazing vehicle of discovery. And when I say chimps – plural – it is the faces, cultures and subspecies that are now also cemented in my mind. Like us, chimps are not so much a single thing as a diverse collection, as varied and wonderfully unique as any species on Earth.

That diversity became brilliantly apparent when I began filming in Zambia at the Chimfunshi Wildlife Orphanage. Ironically, there are no native chimps in Zambia, Chimfunshi is, however, a sanctuary of over 130 chimpanzees representing chimp subspecies and cultures from across Africa. Within their ranks are Western chimps from as far away as the Ivory Coast, Central chimps from Gabon, even the Nigeria-Cameroon subspecies and the Eastern chimps of neighboring DR Congo and Tanzania.

If your science is a bit rusty or fuzzy you might be asking, what is a subspecies?

A common criterion for recognizing two distinct populations as subspecies rather than full species is the ability of them to interbreed without a fitness, or health, penalty. In the wild, subspecies do not interbreed due to geographic isolation or sexual selection. The physical differences between subspecies are generally less distinct than the differences between species. For the all subspecies of Pan troglodytes – chimpanzees – geographic isolation is increasingly driving them into separate populations, intensifying the opportunity for the evolution of cultural uniqueness. Deforestation and forest fragmentation, along with disease and poaching, are pushing chimps into evermore isolated populations. In a strange, and tragic twist of fate it is all those things that have brought all the subspecies together at Chimfunshi in Zambia. 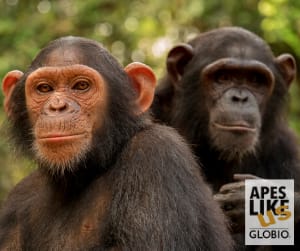 The distinctions between different subspecies isn’t skin deep. Indeed, even though these two have such different appearances, they are both Central Chimpanzees.

When it comes to subspecies, appearances can be deceiving: face color – pink, black or freckled –  doesn’t tell the story, neither does shape of ears, or tint of hair. Nope, subspecies is buried deeper in the DNA. Some primatologists have noted enough consistent physical differences to suggest Western chimps sport “masks”, and Eastern’s have dark or black faces, while the “hairy chimp” should be that from the isolated border of Nigeria-Cameroon.  What does bubble to the surface with increasing isolation is a chimp’s language, its tool-making type and skill, its language, and perhaps even its accent once we learn how to listen closely enough.

What is unique about Chimfunshi Wildlife Orphanage is researchers and staff having an opportunity to witness some of these differences. This is especially true as I filmed new rescued chimps arriving from various subspecies regions of Equatorial Africa. If the individual was old enough and had not been polluted by prolonged exposure to human indoctrination, a reflection of its original culture might still be lingering. Unfortunately, for many, human habits had varnished over chimp tendencies. Some chimps even arrived unable to “speak” chimp; missing basic chimpanzee communication using vocalizations, facial expressions, gestures, postures, and gait.

One of the more fascinating cultural social behaviors was highlighted in an article by a research collaboration between the Gonzaga University and the Max Planck Institute conducted at Chimfunshi.

“By following the chimpanzees over time, we were able to show that 20 young chimpanzees gradually developed the handclasp behavior over the course of the five-year study. The first handclasps by young individuals were mostly in partnership with their mothers. These observations support the conclusion that these chimpanzees socially learn their local tradition, and that this might be evidence of social culture,” Bodamer explains.

“Continued monitoring of these groups of chimpanzees will shed light on the question of how these group-traditions are maintained over time and potentially even why the chimpanzees like to raise their arms up in the air during social grooming in the first place,” van Leeuwen adds.

The chimps at Gombe Stream will always form the foundation of my chimpanzee world, and the chimps at Chimfunshi will always be a part of that expanding view. As Pan troglodytes populations continue to shrink, and each subspecies is isolated, that view will undoubtedly evolve as well.