by Meg at GlobioDec 7, 2020Ape Action Africa, Apes Like Us, Great Ape Education, Primate of the Month

December Primates of the Month: Wonderful World of Monkeys

For this Primate of the Month, we’re unpeeling some of the many layers to the Monkey. The largest of the three primate groups, monkeys are often characterized as mischievous and cheeky, and while that’s not far from the truth, there’s much more to these incredible primates! Dive in with our fun facts and other info below. 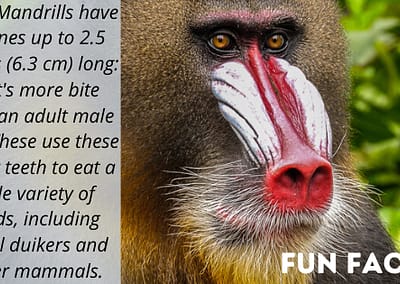 The Old World and the New World

New World Primates encompass five families of monkeys: Aotidae, Atelidae, Callitrichidae, Cebidae, and Pitheciidae, all known as platyrrhines, due to their flatter, sideways facing nostrils and are largely arboreal and certain of these have developed prehensile tails to help them brachiate (swing) through the higher canopies. There are also marked differences with their vision and dental structures compared to Old World Primates to better adapt to lives in different forest structures. Most New World Primates do not possess opposable thumbs, indeed some of them (like Spider monkeys) do not have thumbs at all to ease their arboreal travel.

Old World Primates are designated in the category Catarrhini or downward-facing nostrils. This group does include great apes and gibbons (yes, that means humans too!), as well as 23 genera of Old world Monkeys! Unlike their counterparts that spend the majority of their time in the treetops, Old World Monkeys spend much more time traveling and foraging on the ground, especially larger species like Baboons and Drills. Generally, these monkeys do not possess prehensile tails but many do have opposable thumbs, cheek pouches, and ischial callosities (aka buttpads) to ease their time spent on the ground.

All in the Family: Species

If you look at different sources, chances are you’ll find wildly varying numbers of total species – some as high as 512 while others advertise more conservative numbers. What’s with the discrepancies?

Well, taxonomic classification is both an art and a science, with species merging, new subspecies being identified, and unfortunately, species going extinct fairly regularly. Changes in the scientific name are also relatively common as new genetic information is revealed.

New species are often found and identified, with the latest being the Popa Langur in Myanmar. As more forest is destroyed, monkeys and other species of wildlife are forced to move, giving researchers more opportunity to observe and record them.

The Monkey world encompasses a huge variety of sizes, shapes, and colors. When full-grown, all monkeys fall between the following size/weight ranges:6-37″ tall (15-94 cm) and 4oz-87lbs (115gr to 40kg) with Pygmy Marmosets (Cebuella pygmaea) taking the trophy for the tiniest monkey in the world and Mandrills (Mandrillus sphinx) nabbing it for the largest

Many species are adapted to their environment in creative ways, some examples include:

– Thumbless spider monkeys who can more easily brachiate through the trees

Diets in all primates are highly tailored to their environment, with some preferring more foliage-based diets and others taking a less picky approach and incorporates more insect and animal proteins into their menus. Fruits, leaves, roots, shoots, flowers, nectars, barks, insects, eggs, small birds, and mammals account for the majority of nutrient sources in all wild primate diets.

Fun Fact: Monkeys and bananas belong together like peas in a pod, right? Not quite!

While bananas may be important sources of nutrients for primates in captivity, they rarely get the chance to munch on these potassium laden fruits in the wild, unless they scout nearby banana plantations. Bananas as we know them have been modified over generations of human agriculture and are not found in the wild.

As is the case amongst all primates, human activity is the main driver of population decline, with habitat loss, the pet trade, and bushmeat hunting being the key concerns. Generally, the situation is quite bleak for most monkey species with populations declining (some at rapid rates) as wild habitat disappears or is infiltrated by humans.

Most primates are found in areas of high biodiversity – with lush forests and an abundance of other wildlife. These are the same regions that unfortunately harbor the largest numbers of valuable primary resources that humans need: trees for timber and precious metals and other extractable materials. Poorer regions that are abundant in these natural resources, such as countries around the Congo and Amazon Basins, are more susceptible to the influence of foreign timber and mining companies who pay big bucks for extractive rights. The timber industry is obviously destructive on the ground level, razing habitats at a rapid rate, while the mining industry also contributes to higher pollution levels in the area. As human populations also grow, more land is needed for livestock and agriculture to support their own nutritional needs. This has led to a significant loss of pristine forest with fruits and other edible and biofuel crops (such as palm oil) taking its place.

For monkeys, these huge human threats lead to less land –> less food –> higher competition between troops. It also means that the areas that are suitable to live in cannot support large troop numbers, so groups are forced to be smaller, leading to less genetic diversity in the wild.

More commonly, as natural habitats disappear and wild monkeys have access to human food sources and garbage, they are incorporating more of these higher-calorie human foods into their diets. This has led to greater rates of obesity in wild semi-urban populations as well as increased aggression towards humans (particularly women and children) who are spotted with food, as well as instances of monkeys raiding picnics and houses (with open windows/doors) if food is out and in view. These conflicts can be dangerous for all involved as it puts humans at greater risk of being bitten or injured by monkeys (especially if caught in enclosed spaces like homes) and for the monkeys to be shot, poisoned, or injured in their attempts to get food. For this reason, many urban conservation campaigns caution against feeding wild populations. This is especially important to help curb zoonotic disease transmission between humans and monkeys as well.

As monkeys are naturally found in regions of rapid human population growth and high poverty rates in South America and Africa, they quite often fall victim to the bushmeat trade. Some countries, like DRCongo and Nigeria, are decimating wild primate populations (including great apes) as other animal proteins such as beef, poultry, and seafood are scarce and costly. Depending on local, statewide, and international regulations, killing monkeys for consumption and trade may be entirely legal if the monkeys are not listed as threatened or endangered under IUCN Redlist Guidelines. However, the general lack of law enforcement and high levels of corruption in these areas means that even the capture or killing of endangered (and thus illegal) species often goes unnoticed, unchecked, and unpunished. Not only is the bushmeat industry enormously detrimental to wild population numbers (and of course the individual monkeys that are killed), but it can also lead to further zoonotic disease transmission in wet markets, as has been looked at in-depth since the emergence of COVID-19.

The pet trade is a global industry of varying legalities depending on the country. Due to IUCN regulations, many species are prohibited from being commercially traded, and consequentially most exotic pet vendors in Europe and North America use their own in-country captive populations for breeding rather than pulling individuals from the wild. However, in range countries, this is not the case. As wild populations are killed for the bushmeat industry, babies are often pried from their deceased mums and sold at local markets as pets.

Not only is this intensely traumatic for the babies, but the amount of 24/7 care, food, and other items required are also often shocking to families who take them in. Infants require round-the-clock feeding and care (much like a human infant) who then grow into agile juveniles with sharp teeth and the need to run, jump, and climb – often destroying the insides of rooms. In an effort to “domesticate” them, some pet owners remove their teeth and/or secure chains or leashes on them, both of which can result in significant long-term health issues. Wild diets are difficult to replicate, leading to other chronic health issues such as Type 2 Diabetes, obesity, dental issues, stunted growth, and more in the monkeys.

When “pet-owners” realize how difficult monkeys are to keep as pets, they often are forced to get rid of them, either by surrendering the monkeys to sanctuaries or zoos, releasing them back into the wild, or worse.

Regardless of the legality, due to their specific social and dietary needs, primates are never suitable pets.

Curious George – a mischievous little primate whose inquisitiveness often lands him in hot water with the Man in the Big Yellow Hat. But what is he?? While curiosity is the trademark of young primates everywhere, it seems like that little furball is definitive: we don’t know. His size and anatomy (specifically: his distinct lack of tail) indicate that he leans toward being an ape, yet he doesn’t exhibit typical chimp locomotion like knuckle-walking. Based on these factors, the consensus is that Curious George is likely a Barbary Macaque!

These mid-sized monkeys sport a vestigial tail nub and are found in Northern Morocco and Algeria, as well as a small population in Gibraltar. Barbary Macaques (Macaca sylvanus) are some of the most well-known monkeys due to their popularity in zoos and biomedical research labs.

Primates in peril: the significance of Brazil, Madagascar, Indonesia and the Democratic Republic of the Congo for global primate conservation