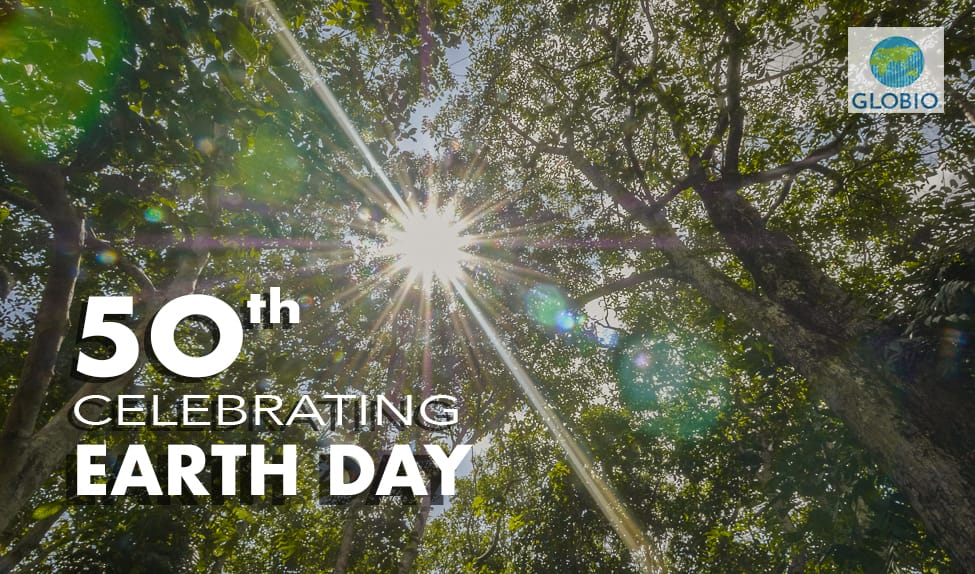 Sunlight pours into the tropical forest with unflickering regularity. That consistency insures a light and humidity needed to power the richness of biodiversity and related ecosystem services we are only now beginning to understand.

A low humid fog hangs over the river, shrouding the tops of the surrounding rainforest, an invisible bathing of microdroplets. This morning the river world is a monochrome grey-green, the sunrise still a half-hour away. Across from the tired wooden dock a pair of hornbills, in grey silhouette, glide in slow motion between treetops. Dockside, dozens tiny fist-sized black plastic-wrapped seedlings are being loaded into the boat. Their journey in reverse is about to begin. For each of these was a rainforest seed cast free four months ago in November, the return journey is more than a birth for themselves but a rebirth of an entire forest, resurrection of an entire ecosystem, from the ashes of a nightmare.

A year ago this month I made a return journey up the Deras River in southern West Kalimantan Borneo, 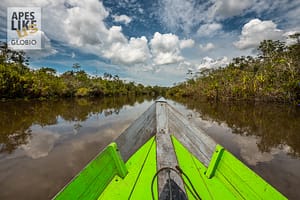 Heading up the Deras River into the riverine tropical peat swamp forest of the Pematang Gadung Community Forest, West Kalimantan, Borneo Indonesia. Borneo has some the worlds highest biodiversity — unassuming peat swamp forests are a riot of diverse life.

it was the most Earth Day of days I can remember. I was sharing the boat with fifty native rainforest seedlings of a dozen types, and two members of Yayasan IAR Indonesia’s reforestation team. We were headed to a landscape ravaged by fire from the 2015 inferno that devastated Borneo and left 2.6 million hectares scorched, along with a toxic witches-brew of gases and smoke choking the global atmosphere unlike any in the history of human-caused disasters. In the fire’s wake the biodiversity of Borneo from microbes to orangutans was traumatized, and the services these tropical forests provide were catastrophically damaged.

Fifty years ago, on that first Earth Day, what its founders Denis Hayes and Senator Gaylord Perry were focused on was Ecosystems Services. They weren’t calling it that. It was another pair that same year, 1970, Paul Ehrlich and Rosa Weigert, that coined the term. But Hayes and Perry’s Earth Day was focused on raising the alarm about essential, primary, life-supporting services: air (quality), clean water, and loss of ecosystems to pollution and destruction. They could easily have just focused on trees, and more broadly tropical forests to meet many of their Earth Day goals.

Recognition of trees and their role in ecosystem services is nothing new to those wise enough to look. Plato, the Greek academic and philosopher (c. 400 BC), understood that deforestation could lead to soil erosion and the drying of springs, he vigorously counseled against it. Trees, by way of forests, have always been at the heart of ecosystems services.

Tropical tree seedlings for reforestation of peat swamp forest destroyed during the 2015 fires in Borneo. Eventually 750,000 seedlings will form the foundation for restoring the rich biodiversity of the Pematang Ganung Community Forest and home to nearly 500 Critically Endangered Bornean orangutans.

Trees reach their diversity zenith in the tropical forests of places like Borneo. My leafy traveling companions would someday form the architectural foundation and scaffolding of a tropical forest that will join a global botanical community vital to the survival of all life. Collectively, life of tropical forests are approximately two-thirds of the planet’s terrestrial biodiversity and provide most Earth ecosystem services. The seedlings we carried that day would contribute to the biodiversity of Borneo — unrivaled on Earth — and insure critical ecosystems services.

Fifty years ago the impacts of the human pollution juggernaut could be seen in the air, water and land. Much of the focus of that first Earth Day was on what everyone could see everyday in their own neighborhoods and cities — smog, litter and polluted water. In some cases it was the shock of what they had never seen before, like a year earlier when Cleveland’s Cuyahoga River burned, an entire nation and world noticed.

Fires have often reveal the unseen. In 2015 as the fires in Borneo torched vast areas of tropical rainforest much of the world turned a blind eye. What was revealed however was a landscape of peat exposed. Peat is sequestered carbon. Atmospheric carbon stored in the form of fallen leaves and twigs, branches and trunks. Peat below Borneo’s lowland rainforests is meters deep. Borneo accounts for over half the world’s stored tropical carbon: an estimated decade worth of carbon created by human actions (the burning of fossil fuels for example). The standing living trees of lowland tropical forests in Borneo protect this unseen carbon from returning to the atmosphere — helping mitigate climate change.

To truly celebrate the 50th anniversary of Earth Day perhaps the party would best be hosted in a tropical forest, surrounded by trees. Because what we are fast learning is without protecting and reforesting these tropical forests we won’t be having many future celebrations of any kind.

When asked why GLOBIO is focusing on trees reforestation in Borneo, one answer is simple: biodiversity. Between 1995 and 2010 over 600 species have been discovered – that is 3 species each and every month. At least 15,000 plants, of which 6,000 are found nowhere else in the world, can be found in the swamps, mangroves, and lowland and montane forests of the world’s third-largest island. By helping to restore the peat swamp tropical forest of Pematang Gadung through our Orangutan Tree Project we are taking a critical step in not just rebuilding the forest home of the critically endangered Bornean orangutan but a biodiversity unrivaled on Earth.