by Meg at GlobioFeb 19, 2021Apes Like Us, Great Ape Education, Primate of the Month

February Primate of the Month: Bonobos

February 14th isn’t only a global day of love and affection, it also marks International Bonobo Day! It’s no surprise that these two coincide as there’s much to love about the beautiful bonobo. Learn more about these great apes below. 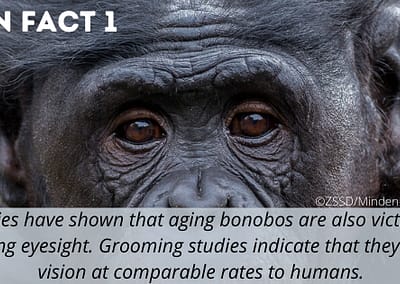 Bonobos are only found in the Democratic Republic of Congo, in the area distinguished by several key Congo basin-feeding rivers: the Congo River, the Lualaba River, and the northernmost area of the Kasai River. Within this region, these elusive apes predominantly inhabit lush tropical rainforests but they will move between agricultural areas, swampy forests, and marshy grasslands.

Within this semi-circle range, there are four documented population areas with varying levels of protection and NGO presence.

Bonobos used to be classified as pygmy or lesser chimpanzees based on the comparative difference in skull size between the two species. As of 1933, however, bonobos have been recognized as their own separate species under the Pan genus umbrella, sharing the distinction with chimpanzees as the closest relatives to humans.

Despite their former names, bonobos are actually fairly similar in size to chimps reaching up to 61 kg (134 lb) in weight and 124 cm (49 inches) tall when standing bipedally. Males are noticeably larger than females and interestingly, the females do not possess canine teeth! Both sexes have dark fur covering much of their bodies, with dark black-brown skin underneath. Females do exhibit rump swelling of their sexual organs, but unlike chimps, their swellings don’t necessarily coincide with ovulation.

Captive individuals can live into their 40s, whereas their wild counterparts reach their 20s. There have been claims of wild bonobos living up to 50 years old!

Bonobos prefer knuckle-walking but will walk bipedally, especially if wading into rivers for a special lily flower treat.

Bonobos live in multi-family communities of up to 100 individuals, often breaking into smaller groups of under ten during the day and reconvening at night, in what’s known as a fission-fusion society. Females are the reigning sex in bonobo community with the females leaving their natal group and joining nearby populations upon reaching sexual maturity. Bonds between individuals are commonly created and upheld through male-female or female-female grooming and contact sessions rather than fighting for it.

Despite the higher status of the females, there is still a distinct male hierarchy, with the alpha-male taking a leading role in protecting the troop against threats. Nevertheless, the alpha-males are still “under” the leading female who guides the group, determines travel direction, and maintains peace.  The hierarchy among the males is often established through the mother’s presence in the group and will stick with the male for life.

Unlike other primates, there is not a set birthing season, with females giving birth throughout the year. As bonobos are quite promiscuous, the males can’t be sure which infants are theirs and thus leave the mothering to the females, although they are quite tolerable of the little ones and may engage in play. Infants stick close to their mom’s side and learn most of their survival, climbing, and forage skills from mom and other females in the group. Bonobo reproduction rate is slow – with up to 4.8 years passing between giving birth but the intense care that the mothers provide to their young does pay off in the long-run as the survival rate of young to six years old is 73%! Generally, the young will wean off mom around four years old and will reach sexual maturity at around 14 years old for both males and females.

Bonobos have quite a reputation for being peaceful and cooperative, especially when compared to chimpanzees who tend to exhibit much higher levels of aggression when both are in comparably captive situations. However, despite the wealth of data – much of which was collected by noted Primatologist Frans De Waal –  is largely based on captive populations and requires further research on wild populations. Sadly, with the decades-long conflict continuing in DRCongo, access to habituated wild bonobos can be inconsistent, dangerous, and tricky to secure.

A Different Kind of Hello

Much of their notoriety in the primate world comes from their unique sociosexual behaviors. Genital rubbing, pseudo-mating, and other sexual activities play a key role in cementing bonds between individuals of both sexes. When a new female enters the troop, they will solidify their acceptance with higher-ranking females through these behaviors.

Many primatologists speculate that the generally peaceful nature of bonobos is thanks to the abundance of food within their Congo Basin range. This increased access to food (in contrast with their chimpanzee neighbors to the north) may omit many of the factors that cause other apes and primates to compete for resources.

Even though bonobos have not been recorded killing one another or engaging in infanticide like chimps, that’s not to say it’s all love in the bonobo kingdom. Males will use violence to secure their rank within the troop and will face-off with male patrols from neighboring groups, especially in periods of food scarcity. Females also uphold their feeding-first rights and will monopolize tastier foods, becoming violent with pesky males if they try to sneak a bite.

Audio, visual, and tactile communication are all important for bonobos. Vocal calls, such as screaming, barking, grunting, and pant-hooting help communicate the discovery of forage or threats, and their calls are used in different contexts, making them too rudimentary to be akin to human words. Bonobos are also known for their well-documented touching, rubbing and other genital contact between troop adults, helping to establish individual rank.

Bonobos enjoy seasonal treats of the forest, especially fruits of all colors! Depending on the landscape and the season, bonobos will seek out fruits, nuts, seeds, roots, shoots, and to a lesser extent, grubs and worms. They have rarely been observed eating meat.

Bonobos are important seed dispersers when considering the number of fruits they consume and the lengths they can travel each day (up to 5 km daily). This is particularly helpful when they pass through regenerating secondary forests and leave behind partially digested seeds in their waste. Studies have shown that the sheer number of seeds they consume and pass in their lifetimes (several tons!) contribute significantly to the overall health and biodiversity of their native forests.

Humans are the critical threat and the only documented predator for wild bonobos. Primatologists speculate that leopards and pythons may prey on bonobos – especially younger or weaker individuals, as they do with chimpanzees, but these speculations have yet to be documented.

Bonobos are classified as Endangered under the IUCN RedList guidelines, meaning that injuring, killing or trade of bonobos or their body parts is strictly prohibited (unless zoos or research institutions).  Surveys conducted in the four main strongholds suggest that there are at least 15,000 with up to 50,000 wild bonobos around DRCongo, but other surveys have indicated that the data set is too incomplete to make any realistic speculations.

Bushmeat and deforestation are the leading cause of bonobo population decline in their home range. DRCongo has a population of 86 million+ people, many of whom are facing malnutrition, extreme poverty, and other tragic impacts of long-term conflict. These combined have increased their reliance on the lush Congolese rainforests for food and other resources. The Congo Basin is not only filled with vast numbers of biodiversity, it also has high levels of precious metals and mineral deposits. Cobalt, copper, diamonds, tin, and many other valuable materials are being mined at warp speeds to meet global demand. These metals played a key role in both of the Congolese wars with dangerous, unregulated, and often criminal mining operations continuing today.

National Parks and other protected landscapes are widely debated in the DRCongo as they often operate in conflict with the wants and needs of local communities, further exacerbating the challenges faced by organizations looking to increase protection measures for bonobos. The ongoing internal conflict has also greatly hindered any enforcement when individuals and communities do unlawfully kill or capture these amazing apes.

While bonobos (and the communities around them) certainly have their fair share of challenges, all hope is not lost for these great apes!

Conservation action plans have existed for 20+ years to help guide protection and community-based conservation initiatives. These plans, largely spearheaded by the IUCN, have been created with input from experts in many different fields to create a comprehensive plan for bonobo survival. the latest rendition of the plan can be read here.

There also exist a number of non-governmental organizations working to protect bonobos both within DRCongo and abroad. Lola Ya Bonobo is the only existing sanctuary to provide care for bonobos orphaned due to bushmeat in DRCongo. Their work is critical in not only providing care to individuals but also in raising awareness of the threats they face. There is also wide support on behalf of the UN, USAID, WWF, and other powerhouse conservation organizations to implement comprehensive, long-term, community-led initiatives for bonobo survival.

Lola Ya Bonobo – the world’s only Bonobo Sanctuary

What would happen to the trees and lianas if apes disappeared?