Has there been a more chaotic year? Perhaps not since being plunged into world war, notably the first war, with a pandemic in its wake, has a year been felt by more people in more places. Certainly, the Coronavirus pandemic takes top honors on most lists, dominating media headlines daily, with tens of millions infected and nearly two million dead. It has mentally, emotionally and physically paralyzed us all, including global economies and international travel. But in the shadows of the pandemic the pain has been equally as great from tragedies that should concern us all. Tragedies lost in the shadows of 2020.

Before this year slips completely into the ledgers of history, and with a clean 2021 we pretend to start anew, I think it is important to acknowledge those who lost everything trying to save everything for all of us. 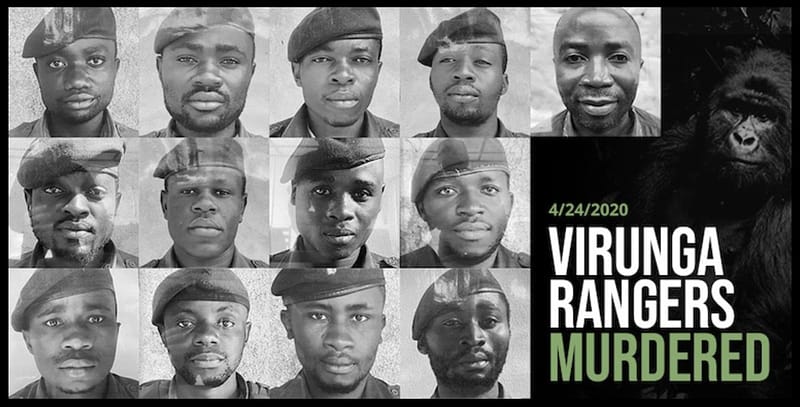 For those on the frontline of the never-ending war to save great apes, 2020 was violent without precedence. One place in particular, the eastern Democratic Republic of Congo —between chronic rebel wars and diseases — has long been the deadliest place on Earth. On April 24th, as the world spun aimlessly in a confusing corona haze, a team of Virunga National Park rangers was viciously ambushed and slaughtered returning to park headquarters — their names and courage should never be forgotten:

Since that event others have been killed:

GERMAIN KAMBALE VYASAKI, 28: A Virunga National Park Ranger who was killed on March 3, 2020 during an attack near Nyamilima.

BAGURUBUMWE CHUHOZE DEOGENE, 47: He was killed on 10th October 2020 during an attack on an ICCN patrol post near the Village of Sarambwe.

Collectively 2020 has been one of the most violent years on record for attacks on rangers, conservationists, environmental journalists and researchers. In the shadows of a pandemic it’s difficult to alert and alarm people to these tragedies when personal worlds seem so out of control. But this pandemic will pass, and like the lives the virus has taken, we should never forget the lives of those that gave everything trying to protect the post-pandemic world.

Groups like the The Thin Green Line Foundation, The International Ranger Federation and The Game Rangers’ Association of Africa keep tallies on conservation and wildlife rangers who have died, including the Ranger Roll of Honour.