by Meg at GlobioJan 22, 2021Apes Like Us, Great Ape Education, Primate of the Month

Japanese Macaques are known worldwide for one of their favorite pastimes: soaking in the hot springs. While swimming may not be wholly unusual for monkeys in general, the adaptability of these macaques to their surroundings is certainly impressive! But wait – there’s more! Learn all about these playful primates below. 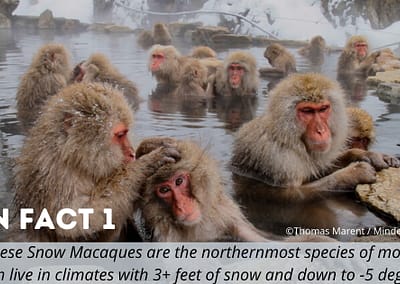 Japanese macaques are popular in the media but they actually occupy a relatively small range – only found on three of the four main Japanese islands Honshu, Kyushu, and Shikoku, as well as a handful of the smaller inhabited islands. This monkey is the northernmost living nonhuman primate, and the only species found in the country. There is one distinct population of the macaque found on Yakushima Island, the only known subspecies of the macaque Macaca fuscata yakui.

Macaques around the world are known for their keen ability to adapt – and Japanese macaques are no exception! These monkeys are found in a wide variety of habitats, from the subtropical southern forests to the subarctic woods of the north. In the 1970s, there was even a population transferred to Southwest Texas! While some succumbed to the new dry and arid climate, the majority of the group survived and now continue to thrive at the Born Free Primate Sanctuary.

Japanese Macaques stick out from the rest with their bright pink strawberry faces and thick, tan coats. They are a sexually dimorphic species, meaning that adult males and females have visible physical differences with males weighing an average of 25 lb (11.3 kg) over the typical female’s 19lb (8.4 kg). The average male also reaches 22.44 in (57.01cm) long. Across the board, their tails are quite stumpy compared to other primates, often reaching no more than 3.5 in (10 cm) long! Japanese macaques are quite stocky and spend much of their time on the ground, although they are notably strong swimmers and accomplished at leaping from treetop branch to treetop branch.

Japanese macaques are quite common in captivity with lifespans of up to 39 years old, compared to the 32 years for old-timers in the wild.

Like many other species of Old World Primate, Japanese macaques live in matrilineal societies, meaning that the females will stick with their natal group throughout their whole lives, while the males will split off to find a new troop at sexual maturity. Sometimes these younger males will form temporary bachelor groups during this transitional period.

The troop (usually comprised of 20-30 members) is led by an alpha male who may keep his reign for several years if he remains physically fit and has the wherewithal to stay in the good graces of the higher-ranking females. Females will generally inherit their mother’s rank and spend many hours grooming one another to maintain this hierarchy.

During mating season, males and females will pair up for periods of up to two weeks for mini courtships, during which time they will travel, eat, sleep, and mate together. A female may court several males during the same mating season, with higher-ranking males stepping in to interrupt courtships of the lower-ranked males.

Macaques are quite nurturing to their young and will allow their infants to suckle until 18 months old! The babies will cling to the mother’s bellies almost exclusively for the first four or so weeks, slowly leaving to practice critical climbing and playtime skills.

Young females and sometimes older male macaques will step in to help care for the young, especially for females who haven’t given birth to their own young yet, almost pseudo babysitting mode.

As mentioned before, Japanese macaques are highly adaptable when it comes to habitats and that includes their food! An individual’s diet may vary greatly depending on the season and where their troops find themselves, including tasty treats such as fruits, roots, shoots, tree barks, insects, eggs, leaves, soil, and a huge variety of plants. Troops near water will incorporate fish, crabs, and other seafaring delights into their diet. Troops found in the north will stick to the fattier foods – nuts, and fruits to help bulk up for the unforgiving winter months.

Japanese macaques live a generally cushy life compared to some of their macaque cousins nearby, but that’s not to say that life is all roses for them! Population estimates from the late 80s put snowy monkey numbers at around 114,000 monkeys, with fairly stable population numbers. These factors have led the IUCN to classify them as “Least Concern”.

One factor working in their favor is that Japan just simply doesn’t have many other species that could be natural predators, save for the occasional feral dog or Mountain Hawk-Eagle. Indeed, humans tend to be their greatest threat – as is the case for countless other primate species.

One of the main contentions between humans and these monkeys is crop-raiding. As macaques are highly opportunistic feeders, they will often go into agricultural areas and make quick work of a meal, further exacerbated by the natural habitat loss faced throughout Japan. Yearly cullings of the monkeys continue to this day, particularly in areas where Japanese macaques are seen as pests or nuisances.

On the plus side, Japanese macaques bring in a significant number of tourists and academic research groups each year. These factors, coupled with their extensive inclusion in Japanese art and lore generally render the Japanese quite favorable to these furry primates. Many population groups are found within protected National Park areas around Japan and are supported by legal hunting bans (cullings excluded).

Japanese macaque behavior and ethology is a widely studied topic, largely due to their distinct habits coupled with their amenability to humans. There have been numerous long term studies on different populations throughout Japan, with keen insights into the culture, adaptation, and even accents between separate groups!

One of the standout distinctions about these amazing monkeys is their propensity to soak in the hot springs of the Jigokudani Yaen-Koen of the northern Nagano province. This area does typically get quite the snowfall in the winter months but feedings from the park authorities keep the monkeys around throughout the year. This is a significant area for both tourism and academic primate research in Japan as it’s the only place on earth where nonhuman primates opt into the warm waters to protect themselves from the cold temperatures.

Snow monkeys are quite the playful species and have many documented play behaviors such as rolling snowballs, messing around with rocks, and of course lots of social play between infants and young! one key explanation for this is that these macaques are so widely studied and used for tourism and are consequently often given food or “provisioned”. This provisioning can attract them to certain areas or bring out specific behaviors for behavioral research. Provisioned macaques are markedly more likely to engage in play and recreational activities than their non-provisioned counterparts.

Cultured Japanese Macaques: A Multidisciplinary Approach to Stone Handling Behavior and its Implications for the Evolution of Behavioral Tradition in Nonhuman Primates