Rescued baby chimps have arrived at Tacugama Chimpanzee Sanctuary twice in the past while our GLOBIO cameras have been here. Twice we have had a chance to tell the world, through the video and photos we create, about the tragedy of poaching. Twice we have helped Tacugama share with the world the chaos and pain of a little life taken from its mother, its family. And twice we have helped tell Tacugama to tell their amazing story of saving, caring, and rebuilding lives. What we haven’t been able to do is tell the story of the other 28 rescues since last we were here. 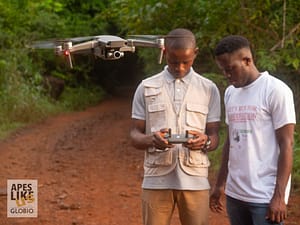 The reality is we cannot be here 24/7, 365 days a year. Training fresh eyes and new perspectives on the ground in the places GLOBIO is working, like Sierra Leone, is needed. To save apes, primates, and the forests, that training – capacity building – is critical. It has become a vital component of our mission. Training those new visions and voices has become one of our core goals, and is at the heart of our communication and awareness efforts to connect species, people, and the planet.

The past weeks have been just that here at Tacugama: lights, cameras, (drones), … capacity building. Several times a week, at 7:30 am sanctuary guides Alfred and Noah, and assistant Conservation Manager Naomi, meet at what we affectionately now call the TCS Helipad, for UAV (drone) flight training. With a DJI Mavic Pro Zoom 2 that will be staying behind with them here in Sierra Leone, we are teaching the trio how to fly, film and map. All are powerful survey tools in telling the conservation story of the Critically Endangered Western Chimpanzee GLOBIO is partnering with Tacugama to tell. The chimp is the flagship species to the survival of the West African lowland rainforest on which it, and other incredible species like the pygmy hippo and rare White-necked Picathartes (bird) depend. That same forest is the future of the people of Sierra Leone, protecting essential water resources; and as we have just seen and heard from global leaders gathered at COP26, keeping those forests healthy and intact is the key first step to our planet’s climate crisis from escalating any further. 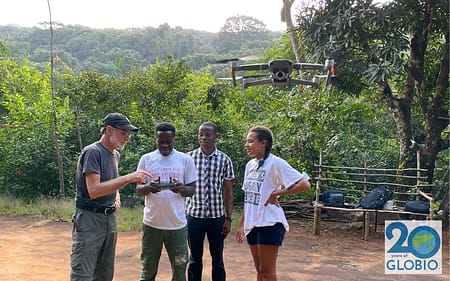 Working with Noah, Alfred, & Naomi on basic drone maneuvers by the Kongo Dam

How do we change the way we tell the world our stories?

It starts with white, affluent visiting westerners not being the only storytellers. Whether under the label of conservationist, researcher, filmmaker, journalist, it doesn’t matter, other voices and visions need to be equal partners in the storytelling. GLOBIO has long recognized the critical need to train and inspire authentic local storytellers. Since we cannot be here every day, where we play the most powerful role is collaborating to build local storytelling capacity. Let’s be honest, “capacity building” isn’t very sexy. It doesn’t rip at heartstrings and purse strings like a baby chimp face staring woefully with large chestnut eyes. But training in filmmaking, editing, radio programs creation, audio recording village songs, voices, traditions, and developing communication strategic plans are the backbone of telling the world about not two, but all 28 of the rescues made, and why it keeps happening, and how together we can stop it. This onsite content-creation capacity has further ripples – as Sierra Leoneans, Alfred and Noah can speak to their fellow countrymen in their own language – both literally and proverbially. Crafting pieces that Tacugama can use in Krio, Temne, Mende, and other languages will reach a wider, local audience to better engage them in all aspects of chimpanzee conservation.

Back at the TCS Helipad it’s just past 9am, Alfred, Noah, and Naomi have finished a half-hour each of playing spin the drone around a large pile of rocks topped with a bottle (trust me, not anywhere near as easy as it sounds – as they have all discovered!). The training teaches techniques in subtle control of the drone and its camera, both critical for mapping chimp habitat, deforestation issues, and reforestation efforts in places like Loma National Park where Tacugama’s conservation efforts are working to protect the largest single population of Western chimps in West Africa. This morning the team got an unexpected lesson – one they can’t learn in a YouTube tutorial. While demonstrating a maneuver, I crashed the drone a 150meters away in the rainforest. With a strong location signal pulsing out from the aircraft we all went bushwhacking and found it! On the forest floor, alive and undamaged (WHEW!)

Not just useful for conservation, the drone provided endless entertainment while in Outamba-Kilimi and in the communities around Loma – the kids from Mansonia (shown here) were amazed to watch it zip around

Before we depart the helipad we schedule the afternoon filming class for 3 pm at the vet clinic with Alfred and Noah. Our goal is to ensure both young Sierra Leoneans are proficient in filming, photography, and media storage before we leave next week – a bit of a tall order, even with all the hours we’ve already logged behind the lens with them! They will begin telling authentic stories from Tacugama, from Sierra Leone. Those stories will be Sierra Leonean stories. Once we return to the GLOBIO office in the USA, the content creation capacity building will continue long-distance over Whatsapp and Zoom as we answer ongoing questions, continue lessons, and review the work they create — but finding a crashed drone will be on their shoulders.

Author Note: As a filmmaker and photographer of over 30 years it has long been critical to me that GLOBIO invest in local and indigenous people telling their own stories, building the capacity for them to do so means enabling the creation of a shared vision of the world. GLOBIO’s ultimate storytelling legacy will be told by those we train and inspire.