by Meg at GlobioMar 17, 2021Apes Like Us, Great Ape Education, Primate of the Month

Pachyderms share the spotlight in March Primate of the Month to help GLOBIO celebrate 20 Years of Connecting Species, People, and Planet.

Very few animals are as symbolic and widely celebrated as the Elephant! Only humans have influenced the shape and evolution of the African wilderness as much as the African bush elephant. Culturally elephants have had an enormous impact humanity, and even played a central role in creating GLOBIO.

While our organization may focus on great ape conservation and awareness now, it was actually an interaction between the orphaned elephants of the Sheldrick Wildlife Trust and some young Kenyan school children that inspired Gerry Ellis to found GLOBIO in 2001!

Look below to learn more about their matriarchal herds, super smarts, conservation efforts, and everything else in between! 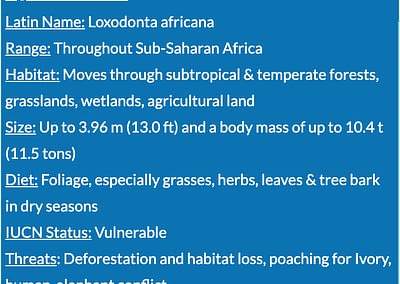 African elephants are found throughout – you guessed it – Africa! African bush elephants are much more widespread than African forest elephants (found only in Western Africa and the Congo Basin).  The bush elephant is found in pockets throughout Sub-Saharan Africa (see map above) and has been extirpated and reintroduced into different regions. Much of their historical range shift has been due to human population growth and subsequent land-use change, often urban sprawl and for agricultural land.

Not many other animals can boast tusks, a trunk, AND tower up to 4 m (13 ft) tall, but the elephant can!

African elephants have grey skin about 3 cm (1.2 in) thick and are covered in a sparse coat of brown-black hair and a non-prehensile tail. Their trunk, however, is prehensile and, like their tusks, is practically an elephant’s multi-tool with many uses. Their trunk is an extension of their upper lip and contains 40,000+ muscles that enable the elephant to dig, lift, dust themselves, vocalize, smell, drink, and more – pretty handy for a single appendage.

Elephant ears (not just a tasty fair food) are nature’s fans and help elephants keep themselves cool by creating a breeze and thereby exposing large blood vessels in the ears to cooler air to lower the heat of their massive bodies.

Elephant tusks begin to grow after the calves lose their milk teeth (baby teeth) at about a year old and are essentially dramatic incisor teeth for adults. Both males and females sport tusks that grow continuously and can reach up to 2.4 m (8 ft) long and weigh up to 45 kg (100 lbs). Tusks have many uses, including stripping bark from trees, defending against predators, digging for roots, and for showing off for the females in mating season. Elephants of all species are often targeted for their tusks, which, similarly to human teeth, are predominately the inner dentin pulp (known as ivory) and coated in a sturdy layer of enamel. Elephants whose tusks reach the ground are known as “tuskers”.You can read more about the ivory trade below. and there are estimated to be only dozens remaining throughout the continent. With so few left, they are huge targets for ivory poachers and will often have local rangers and guides keeping an eye out for their safety. Typically, only bull males reach tusker status but there have been sightings of tusker females, even rarer yet!

You can read more about the ivory trade below under Threats.

With their considerable daily food needs, elephant teeth are constantly used to munch down on foliage and go through significant wear and tear! Elephants have four molars that wear down and are replaced 4-6 times during their lives. Malnutrition due to poor dentition is the most common cause of death for older elephants once their teeth stop regenerating around 40-60 years old.

Elephants take the cake for the longest gestation period (pregnancy) in the world with pregnancies lasting on average 22 months – nearly two years! Females start producing offspring in their early-mid teens, typically leaving 3-6 years between births. Infants in a herd are cared for by all females, known as “allomothering”. This gives the younger females a chance to hone their maternal skills while taking the sole mothering burden off the higher-ranking adult females who guide the herd to feasting areas and watering holes.

With such long pregnancies and interbirth periods, males are keen to gain the attention of the females to breed. Sexually mature males experience periods of “musth” which is heightened testosterone levels that increase sexual activity and aggression with other males to indicate to the females that they are strong, hardy, and worthy mates. Females will low-call to attract males from afar and then, once she chooses her mate, will rely on them to protect her from other males. Because of this, bull males have later breeding ages than the females and will produce bigger offspring when they themselves are at the height of their health and well-being, in their late thirties. Males will stick with their female mates for approximately 30 days before moving on to find another in an evolutionary urge to reproduce as much as possible.

As mentioned earlier, the females in a herd all help care for the young, in a process known as “allomothering”. However, despite the shared infant care, there is still a tight bond between the mother and her baby, with the young sticking close to their mother’s side for their first four years. Infants can walk within ~20 of birth and will drink up to 12 liters (3+ gallons) of breastmilk each day! Young elephants learn all the skills they need from the other members of the herd – how to navigate landscapes, find tasty foods, and of course – play-wrestle and mud bath!

All elephants are herbivores and win the prize for getting their five-a-day in each day! Their diets consist of foliage, fruits, grasses, bark, twigs, and sometimes minerals from the soil. African elephants can put back a whopping 90-272 kg (200-600 lbs) of food each day to meet their nutritional needs. Because of these massive amounts, they spend the majority of their day grazing and moving from one feeding spot to the next. They also take in an average of 190 liters (50 gallons) of water each day. Considering herds may have 70 members, this puts a huge strain on the landscape, especially during drought seasons where food and water may be in short supply. During rainy seasons, elephants are able to be pickier about the foods they consume, opting for higher nutritional density.

Elephants live in multi-family, matriarchal herds of 20-70 members. Females stick with their natal group throughout their lives, with young males branching off when they reach sexual maturity, often forming bachelor groups when they are younger to help defend against predators. Bulls return to the herd for breeding and occasional social purposes, often acting as a mentor figure to younger males. Bulls typically do not provide any other infant care. Elephants in the wild can live 60-70 years, with the elder females being cared for by their herd mates in their later years while they help care for the infants in the group.

Elephants are highly intelligent creatures, often compared to great apes and cetaceans. This intelligence often presents in elephants through their social interactions with herd members.

Research indicates that elephants are self-aware through a number of studies, including the mirror test where they recognized themselves in the mirror and used the reflection to check out their bodies. Other studies have been carried out on captive elephants to determine their keen levels of sentience, problem-solving capabilities, and even tool-use abilities.

In the wild, their intelligence is demonstrated in their keen memory of regions (especially those they may not have visited for years). They also have in-depth social behaviors such as mourning the death of herd mates, and marked levels of compassion and altruism, comparable to those of humans!

Some scientists and animal welfare groups argue that these high levels of cognition should preclude elephants from being culled in the wild and kept in captivity.

Audio, visual, scent, and tactile communication are all important for African bush elephants.

African elephants have exceptional ears and can communicate over long distances of 2 km + (1.6 miles), often imperceptible to humans. Trumpeting, barks, chirps, gurgles, snorts, grunts, roars, and low-calls all help communicate threats, food, movements, and other important herd news. Tactile, or touch, communication is usually reserved for mother-infant or mating pairs. Males will scent mark or leave physical signs around bushes and scrub to signal their proximity to nearby females for mating.

Both species of African elephants are listed as vulnerable under IUCN guidelines (with Asian Elephants meriting an Endangered status). Habitat loss and the ivory trade are the two major threats facing elephants in Asia and Africa.

As the number of humans goes up, the amount of land left for wildlife goes down, way way down. This decreasing amount of land puts elephants and their significant land-use at odds with humanity, often on the losing side. As we also see with some primate species, human encroachment leads to more pristine land turned into agricultural areas (i.e. less foraging area for wildlife), pushing the animals to “crop raid” off these farmlands. In certain areas and situations, “crop-raiding” animals may be relocated, but often, farmers are sanctioned to put out poisons, traps, or otherwise ward off unwanted hungry animals through other harmful means. Additionally, as elephants traverse large areas of land, they may simply stomp and damage cattle fences and other man-made structures. Parks and other wildlife areas are starting to use honeybee hives as less detrimental deterrents for elephants (including the Kasiisi Project in Uganda which is supported by GLOBIO!)

While illegal* under CITES guidelines, the ivory trade continues to be a significant threat to all elephants, particularly African bush elephants with their massive range throughout Africa. Ivory is highly sought out for jewelry and trinkets, usually funneled through extensive criminal smuggling networks, often to Asian countries where ivory is perceived as a symbol of high wealth and status. * Limited trade of antique or legally stockpiled ivory is available in some countries around the world.

Wildlife poaching and smuggling is a multi-billion dollar industry and often goes hand in hand with the illegal trade of drugs, weapons, and human trafficking, with significant ties to militant and armed conflict in areas of high biodiversity. While ivory from rhino horn is actually more valuable, the frequency and range of elephants make them an easier target for poachers. Often, when an elephant is felled for its tusks, poachers will seldom take the meat.

While the ivory trade is prohibited, some countries such as Botswana and Zambia, do allow limited trophy hunting of elephants. This practice is popular with rich Americans and Europeans, although transporting their kill back to their home countries may be difficult or forbidden. Some countries designate revenue from hunting fees back into ranger programs and national park running costs. Regulated trophy hunting is a highly controversial practice among conservation communities.

Perhaps the highest level of which is the IUCN African Elephant Specialist Group that works closely with CITES and experts at the Convention of Migratory Species to create ongoing assessments of elephant populations and threats and produce strategic frameworks to mitigate conservation concerns within a variety of communities and circumstances. These frameworks speak to a number of conservation measures from increased law enforcement, improved sustainable eco-tourism practices, community development initiatives, and more in an effort to craft enduring, multi-lateral conservation plans.

Beginner’s Guide to the Ivory Trade from Flora & Fauna International