May Primate of the Month — Putty-Nosed Monkey

by Meg at GlobioMay 8, 2020Ape Action Africa, Apes Like Us, Great Ape Education, Primate of the Month 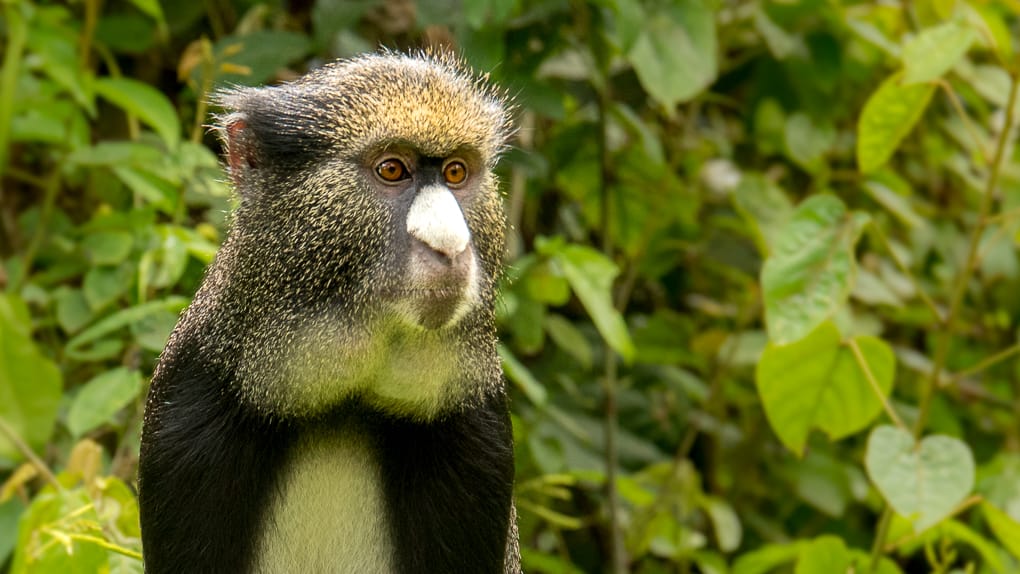 May Primate of the Month – the Putty-Nosed Monkey

The Putty-Nosed monkey, sometimes referred to as the Greater Spot-Nosed monkey, are part of the Guenon family, and, as their name suggests, are distinct due to the white or tan splotch of fur on their nose.

Putty-Nosed monkeys are found in Western and Central Africa throughout densely forested regions. These monkeys are arboreal and use the heavy tree cover to hide from predator and to forage for food. They tend to be frugivorous but will supplement their diets with leaves, insects, nuts and seeds. Because of their love for fruits and seeds, they likely play a role in seed dispersal – but more studies are needed to investigate how large of a role they play compared to other monkey species in the area.

These primates generally lives in groups of between 12 and 30 animals, led by one adult male who will breed with all of the adult females. As with some other guenons, females will remain with their natal (familial) group for their entire lives, while adolescent males will leave their group and join another for genetic diversity. The male is charged with finding food, protecting the females, and most importantly- signaling to the others when danger is about. 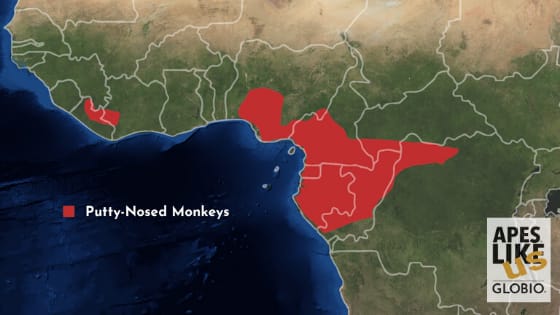 One of the most notable things about Putty-Nosed monkeys (other than their powdered nose) is their communication structure. Primatologists have noted that they will use a small number of distinct sounds and the order in which they are strung can change the meaning of the call. The males especially will use three call types which have been described as ‘booms’, ‘pyows’, and ‘hacks’. Researchers have found that, by combining these calls in different sequences, Putty-Nosed groups will respond accordingly if they recognize the calls to be from the alpha male.

Putty-Nosed monkeys can be sympatric with other monkeys- especially Diana monkeys (Cercopithecus diana), meaning that they can overlap in territory with minimal conflict. Primatologists suspect that, despite competition for food, Diana monkeys (the more dominant of the two species) allow smaller Putty-Nosed groups to hang around for predator detection – especially crowned eagles, leopards or chimpanzees. There is evidence to suggest that Diana monkeys can meaningfully interpret some of the more distinct Putty-Nosed predator calls, and males from both species have been observed fending off crowned eagle attacks together.

Hunting is the main threat against these monkeys – individuals are fully protected in certain range countries but these only have partial protection in others like Cameroon and CAR (i.e. hunting is legal with a permit). Putty-Nosed Monkeys are consumed both in local communities and taken to urban areas for bushmeat trade – this is greatly facilitated by the emergence of new roads from forested areas to larger markets. Putty-Nosed Monkeys are also quite susceptible to habitat loss through forest conversion – i.e. turning natural forest into farmland or tree plantations for logging. Primatologists are anticipating that, with current human population growth and land conversion around Central Western Africa, Putty-Nosed populations will decline significantly over the next 10-20 years.

Don’t miss out on future Primates of the Month — Subscribe Now!