by Meg at GlobioMay 21, 2021Apes Like Us, Great Ape Education, Primate of the Month

Primates are one of the most species dense taxonomic groups with a huge range of size, social structure, habitat, and appearance. As our closest relatives in the Animal Kingdom, primates – apes especially – play an entirely unique role in the web of life. Often touted as the “Canaries in the Coal Mine”, the threats and dangers facing primates today are indicative of our own human survival in future generations – from lack of suitable habitat to increased disease threat to food security issues, it’s becoming clearer that our own fates are deeply intertwined.

Below is an abundance of photos, links & information to help celebrate and educate about some of the amazing endangered primates around the planet. Many of our previously spotlighted Primates of the Month segments feature some of these threatened species. 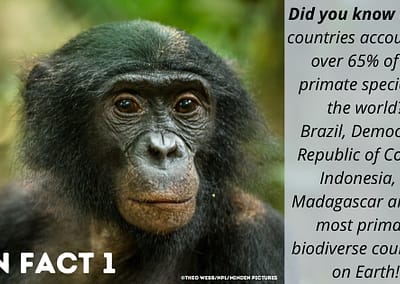 Endangered Primates of the Month

Want to hear more about some of these incredible apes & monkeys? Have a listen to our new “Talking Apes Podcast” with episodes about different aspects of primate life & conservation that are sure to educate & entertain!

To the Podcast!
Primate of the Month Archives
Subscribe to the Newsletter

Arcus Foundation: “State of The Apes” – An in-depth look at the threats facing primates

Natural Resource Defense Council: “Four Countries Are Home to Two-Thirds of the Planet’s Primates – And Most of Those Are Endangered“