by Meg at GlobioNov 13, 2020Ape Action Africa, Apes Like Us, Great Ape Education, Primate of the Month

The red-capped mangabey (Cercocebus torquatus) may go by other names, such as the collared or white-collared mangabey, but there’s certainly no mistaking their distinct crimson caps, fluffy white collars, and bright white eyelids. 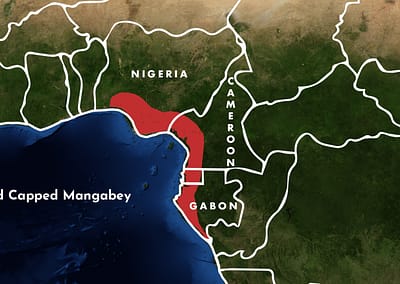 Red-capped Mangabeys occupy a range that spans from Western Nigeria to Southern Gabon, sticking near the coast, with populations never further than 350 km from the ocean. These mangabeys spend a considerable amount of time on the ground – for foraging, travel, and to escape predators. They will venture into the treetops for scouting purposes but will stick to the middle and lower canopies for sleeping huddles, likely due to their larger size. This adaptability to the ground and tree cover gives them greater choice and accessibility for habitat type – including younger secondary forests, mangroves, swamps, developed areas, etc.

Red-capped mangabeys are distinguishable by their (you guessed it!) reddish-brown fur atop their head. This is a marked contrast to their fluffy tufted white cure on their cheeks and slate-grey fur on the rest of their bodies. They also have bright white eyelids, also found in their related Sooty Mangabeys but not in Crested or Agile Mangabeys. These distinct lids help convey a range of emotion, especially threat faces where they lift their brow and open their mouth (also known as “eyebrowing”) to seem more threatening in squabbles and dangerous situations.

Red-cappeds are quite large in the monkey world, with males reaching 26 inches (67 cm) long and up to 25 pounds (11 kg) in weight!

Like other monkeys, these guys love fruits, nuts, seeds, greenery, and small insects. Their fondness for flowers and licking the nectar from different buds has also meant that they have been attributed as pollinators as well! Again, like other primates, these messy eaters also help with seed dispersal – both from dropping nuts and seeds while they eat and spreading them through their own droppings!

With their tough teeth and strong jaws, these monkeys can crack open the harder shelled nuts that are too thick for nearby guenon monkeys. As with many Old-World monkeys, red-capped mangabeys also have cheek pouches that come in handy for storing snacks to enjoy later.

Like most other primates, mangabeys communicate using a variety of visual and verbal cues to signal the rest of their group. Verbal communication is particularly important in the dense foliage to indicate food sources, troop movements, and above all – nearby danger. They are quite expressive in their calls with a series of cackles, barks, shrieks, and their own special “whoop-gobble”.

The troops are no ninjas! Red-capped mangabeys have earned quite a reputation for being noisy monkeys. Adult males have physiological advantages when it comes to being loud with large throat sacs that amplify their calls – making them audible up to a kilometer away! These calls can be useful for marking territory and announcing his presence to nearby troops.

Red-capped mangabeys live in multi-male multi-female troops of 10-35, sometimes more if there’s an abundance of food and space. These mangabeys are generally quite affable within the group, even when they come into contact with neighboring troops. These troop overlaps are made easier if there’s plenty of accessible food and these encounters are often noisy with lots of amicable chatter between troop mates.

Unlike other similarly sized primates who give birth during the more verdant months when food is aplenty, red-capped mangabeys don’t have distinct breeding seasons.

Females will give birth to single infants after ~170 days of gestation. Young infants cling to their moms exclusively during their first few months and will stick close to their sides for the first year at least until their mothers have another baby.

Males and females reach sexual maturity between 5-7 years old, at which time males will travel to find a new, unrelated troop, while females stay with their natal group. Unlike many other monkey species, young males do not form bachelor groups but instead will remain alone until they join their new troop.

As is common in the primate world, human activity is the main driver of population decline, with habitat loss and bushmeat hunting being the key concerns. After surveys carried out which indicated a nearly 50% decline in population since the previous 2008 assessment, in 2019 the IUCN raised their threat level from “vulnerable” to “endangered” with little hope of reversal.

Due to their size, terrestrial movement patterns, and chatty nature, red-capped mangabeys are easy targets for bushmeat hunters. As their forest shrinks and more humans move into their previous territories, they are more likely to rely on crops and agriculture for food sources – making them more of a target for farmers and hunters.

As endangered species, they are listed in Appendix II of CITES agreement to help mitigate the traffic of individuals both living and deceased. As is often the case, however, local laws for their protection are difficult to create and enforce, making their overall outcome even bleaker.