by Meg at GlobioOct 9, 2020Apes Like Us, Great Ape Education, Primate of the Month

These peculiar-looking members of the colobus family can be spotted easily as they travel through the trees. With eight subspecies found throughout Equatorial Africa, there’s plenty to appreciate with these mantled monkeys – read below for more! 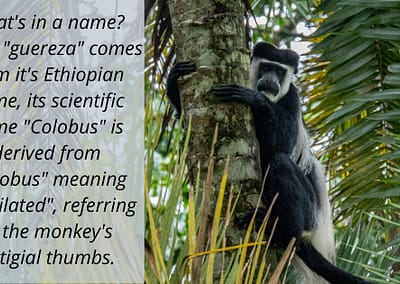 The forest-dwelling mantled guerezas are found in a variety of different wooded areas, including primary and secondary forests, riparian forests (i.e. adjacent to lakes or rivers), and even high-elevation montane forests. Interestingly guerezas, seem to prefer secondary forests over old-growth forests if available, seemingly due to better food sources.

Mantled guerezas are certainly striking to the eye – with a long silky white fringe or mantle running along its sides and tail, in contrast to their dark fur. As medium-sized monkeys, their average sizes range between 17-30 lbs, with the males growing up to two feet long. As with many other Old-World primates, guerezas have callused pads called ischial callosities on their bum to make tree life more comfortable.

Young guerezas are snow-white for their first few weeks, with their fur gradually fading into the species’ characteristic black.

Like other colobus species, guerezas have no thumbs, like adapted to swing through the trees more quickly and gracefully.

Guerezas are known for their leaf-loving ways and consume a number of different leaf species as they become seasonally available. Studies have shown that they often prefer underripe leaves over their full-fledged counterparts. While eating unripe foliage may give over primates a tummy ache, guerezas have a multi-chambered stomach which allows for more thorough digestion and leading to more nutrients being absorbed from the plant matter.

Guerezas will also munch on fruits, nuts, seeds, barks, insects, and even soil in nutrient-rich climates.

Like most other primates, guerezas communicate using a variety of visual and verbal cues to signal the rest of their group. Males will flick and sway their mantle to demonstrate their dominance to other males, as well as the accompanying grimace and teeth-baring that is all-too-common with Old-World primates.

Their most unique vocal demonstration is the impressive roar, typically heard at dawn and dusk from the alpha male as they posture to other nearby males (in other family groups or in bachelor blocks) and determine their territory.

Females may not partake in these distant conversations by roaring but they do spend a decent portion of their day grooming other troop females and infants. Grooming helps to strengthen bonds and calm cranky infants.

Mantled guerezas live in harem-style family groups of 3-15 individuals, with one dominant adult male, several females, and young. sub-adult males will split off to join other troops, often sticking in bachelor groups until they establish their own community group. Females reach maturity at 4 years, with males coming into their own at 6 years.

Guereza females have very tight bonds with infants in their family groups, with the babies clinging to their mums (or aunties) for their first 6 months or so, until they are strong enough to venture off and develop their climbing skills. Because of the care and attention dedicated to each infant, female guerezas may take up to two years between births.

As is common in the primate world, human activity is the main driver of population decline, with habitat loss being the key concern. Currently, mantled guerezas are classified as “Least Concern” according to the IUCN RedList, given their ability to adapt to new forest areas – including some man-made plantations. However, when spotted in these croplands, they may be targetted and killed as crop raiders and pests.

The bushmeat industry has a significant effect on population numbers as their skunk-like coats are popular among humans. They are also found in areas of Equatorial Africa such Cameroon and Democratic Republic of Congo where the bushmeat industry is relied upon for much-needed protein to feed local communities.

Other than humans, guerezas are predated by chimpanzees, leopards, and various predatory birds.