World Rainforest Day — Seeing Rainforests For More Than Their Trees 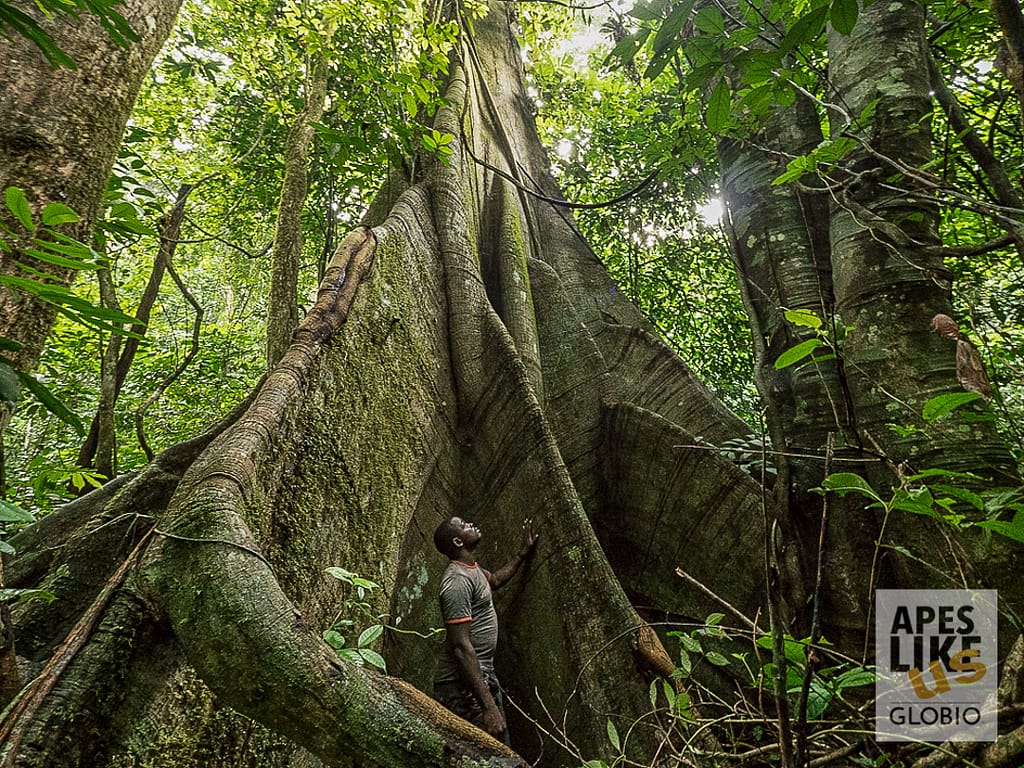 Conservationist Abwe Egong Abwe wrapped in the flying buttresses of rainforest giant in endangered Ebo Forest, a lowland tropical rainforest under threat of conversion to palm oil in the heart of Cameroon — western Congo Basin — Africa. The Ebo Forest is home to as many as 200 chimpanzees, its diversity also includes multiple monkey species, and evidence of a remnant population of Western lowland gorillas.

Venturing into the humid rainforest tropics for the first time can be a shock to your temperate senses. The heat feels like it never goes away. Even at night the heat and humidity can incite a restless riot of tossing in a half-sleep that leaves you in a state of fog at dawn. And dawn feels like a blessing, the only brief respite of heat in the twenty-four-hour tropics. Heat and humidity, while a nightmare to us, are the dynamic duo that breaths hope into the chaos we humans have wrought on places like lowland tropical Borneo. That’s where my last filming journey into the tropics took me; to document the delivery of sprouts of hope, the promise of rebuilding an assaulted forest. Each of the seedlings speeding up river in our boat were the beneficiaries of stability ensured by heat and humidity, millions of years of sameness. Every annual circumnavigation Earth makes of the sun brings a perpetual duplicity; a sameness that has created the greatest biodiversity on our planet, over half of all known life. Our boat load of Bornean seedlings are the offspring of 80 million years of perpetual predictability.

On June 22 we pause to celebrate World Rainforest Day and consider rainforests, for us at GLOBIO that is specifically tropical rainforests, the only home of non-human great apes and the majority of primates, the most spectacular ecosystems on Earth. Hot, humid places that few of us in the temperate zones will ever visit but depend on every day for every breath we take.

World Rainforest Day is a new global celebration, only three-years-old, with a goal of focusing awareness on the crucial nature of our planet’s 80 million-year old rainforests. GLOBIO has joined the awareness effort: contributing a special video (below), Rainforest webpage, newsletter and a week of social media highlighting rainforests.

Recognition of rainforests as more than their trees is acknowledging their paramount role in ecosystem services.

Two of the key energy forces driving Ecosystem Services provided by tropical rainforests are sunlight and water. Forests, via their trees, provide every living creature with the most essential services – clean air and water – for survival.

That is nothing new to those wise enough to look. Plato, the Greek academic and philosopher (c. 400 BC), understood that deforestation could lead to soil erosion and the drying of springs, he vigorously counseled against it. Forests have always been at the heart of Ecosystems Services. It’s clear, we are now learning, tropical rainforests are the heart and lungs of global survival system on which all our lives depends. That concept was never so clear to me as a few years ago when in the rainforest of the Congo Basin — one of the two great lungs of Earth (the Amazon Basin the other) — I was searching for gorillas in their rainforest home, I realized great apes are the canaries in the global coal mine: As goes their fate, so goes ours. Everything they are is inextricably woven into the survival fabric of these rainforests. The difference between us and all the other great apes is they can not reach in mechanically, impassionately from distance, exploit, and remain remote to the consequences of their actions. As diseases like the Coronavirus pandemic now engulfing the world illustrate, distance no long ensures immunity. Our actions compound and eventually trigger a response.

I was searching for gorillas in their rainforest home, I realized great apes are the canaries in the global coal mine: As goes their fate, so goes ours.

Ensuring the survival of great apes, us included, comes down to seeing rainforests for more than their trees, by safeguarding the survival of these immense swaths of tropical rainforest, places like Borneo, Congo Basin, and the Amazon. Forest security translates directly into keeping trees in the ground and standing. Trees reach their diversity zenith in the tropical forests of places like Borneo, Dipterocarps for instance, one of the great tree giants, regularly soar over 80 meters (260 feet) in height. The world record for dipterocarps belongs to an individual of Shorea faguetiana, which stands a whopping 103 meters (328 feet) tall!. Dipterocarps, and the trees like them, form the architectural foundation and scaffolding of a tropical rainforest that collectively are two-thirds of our planet’s terrestrial biodiversity and provide most Earth critical ecosystem services.

The simple truth is life as we know it and like it would not exist without rainforests — period.

The loss of tropical rainforests is not just about a tree here and there through fragmentation, such as slash-and-burn agriculture or charcoal-making, or the loss of a thousand trees, such as palm oil plantations, it represents a shift in the fabric of living on planet Earth. A few months ago that concept was difficult to convey, for most, an unimaginable reality, and then a version of unimaginable struck, Coronavirus, sending life for nearly eight billion into an uncontrollable free-fall. The two are connected. The Hopi people have a word for it, Koyaanisqatsi, “life out of balance.” Tropical rainforests are the requisite pillars to ensure balance. They ensure critical life sustaining ecosystem services stay in balance.

UNPARALLELED DIVERSITY: Tree diversity in some tropical rainforests can be greater in a single acre than all of North America. The production of pharmaceuticals is dependent on this rainforest diversity. Twenty-five percent of all prescription medications are made using some type of compound from living organisms (Goldsmith and Warren 162). Seventy percent of plants utilized in the treatment of cancer live in the rainforests on Earth. Rainforests, delivering ecosystem service worth billions of dollars, all provided free of charge, unless destroyed, then the cost to replace is too high to afford.

The tropics operate differently than the temperate climes, there’s no roller-coaster if seasonal temperature and light; for first-time visitors the seasons seem missing. It feels baffling to the senses: birds don’t migrate, mammals don’t hibernate, and leaves linger green all year. But without doubt the seasons are there, but subtle, and so are the falling of leaves; Sameness is the secret of success.

A year ago when I made a journey up the Deras River, a low flat coastal river serpentining its way through a tropical rainforest to the Java Sea, off southern West Kalimantan Borneo, it was the most most perfect World Rainforest Day of days I can imagine. I was sharing the boat with fifty native rainforest seedlings of a dozen species, and two members of our partner Yayasan IAR Indonesia’s reforestation team. We were sailing through a unique type of rainforest landscape, peat swamp rainforest, ravaged by fire from the 2015 inferno that devastated Borneo and left 2.6 million hectares scorched, and a toxic witches brew of gases and smoke choking the global atmosphere unlike any in the history of human-caused disasters. In the fire’s wake the biodiversity of Borneo from microbes to orangutans was traumatized. Five years later the post-traumatic shock can still be felt.

I began this post by describing the stability that creates the unique foundation on which tropical rainforest diversity relies. Ironically that sameness, which created the diverse rainforests of Borneo, has been its undoing when seen through the eyes of the palm oil industry, but in the end may also be its salvation. Given half a chance — halting new deforestation, eliminating burning, and launch aggressive reforestation projects like the Orangutan Tree Project — rainforests can rise from the ashes.

GLOBIO’s organizational focus on great ape survival includes a particular concern for their tropical rainforest homes. Generating awareness about the plight of great ape survival means raising the alarm over what is happening at the rate of 40 acres a minute to their home and our lungs. And we can, with your help, work to reseeding future forests. In the coastal peat swamp rainforest we are working with local NGO Yayasan IAR Indonesia to replant 1500 hectares of rainforests torched in the horrific palm oil fires of 2015. When completed the reforestation project, called the Orangutan Tree Project, will create rainforest habitat for up to 500 endangered Bornean orangutans, hundreds of endemic proboscis monkeys, and a myriad of life in one of the most biologically rich places on Earth.