by Meg at GlobioSep 8, 2020Apes Like Us, Great Ape Education, Primate of the Month

While Mountain Gorillas may have the late Dian Fossey as their claim to fame, Western Lowland Gorillas have become well known through their use in zoos and because of the infamous Koko the communicating gorilla. These gentle giants are found in Central Africa and boast the highest numbers of any of the gorilla subspecies.

There’s so much to learn about these amazing apes, look below to discover more. And, if you haven’t already, sign up for our Primate of the Month and never miss a monkey! 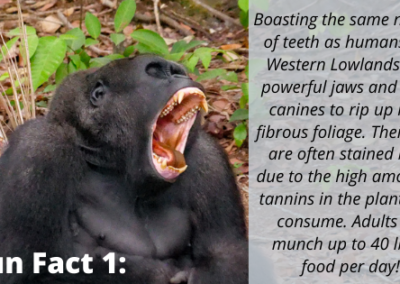 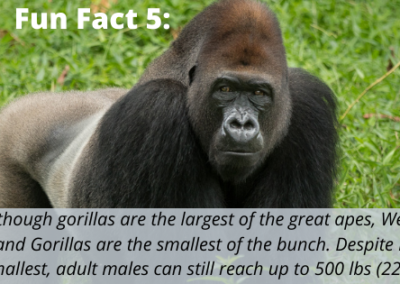 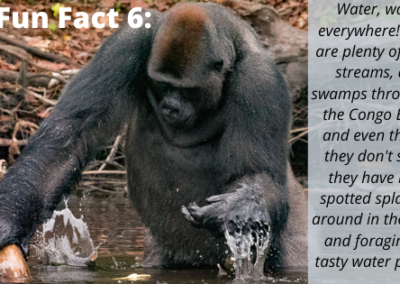 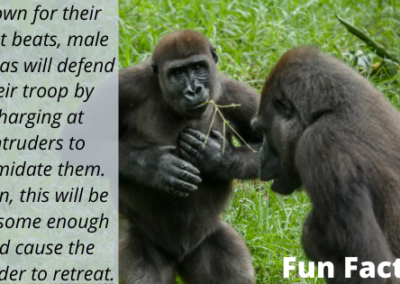 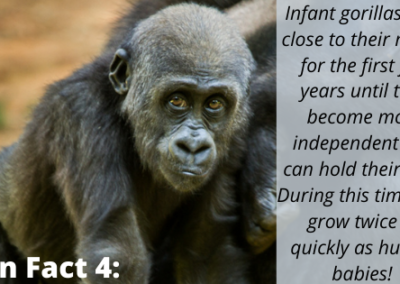 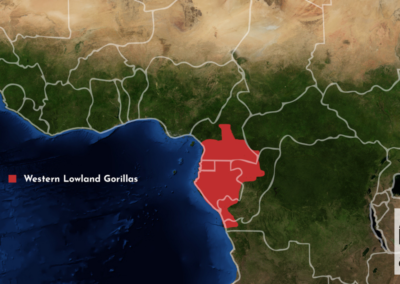 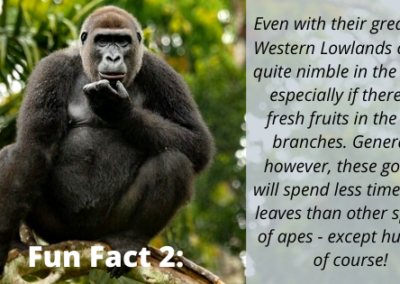 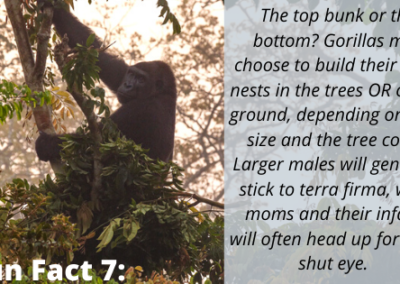 Western Lowland Gorillas have the largest range in the wild, spread through Central Africa, predominantly in Equatorial Guinea, Gabon, and the Republic of Congo. They prefer green areas away from human activity, especially swampland forests with lush trees and biodiversity.

Because of their hefty dietary needs (see more below!) gorillas require a significant amount of forested area with high levels of biodiversity. Due to their eating and movement patterns, they are also nature’s pollinators who disperse seeds through their feces throughout their stomping grounds. Typically, a troop of up to 10 Western Lowlands will cover 2-4 miles per day and will often have overlapping territories with other gorilla families, especially in the fruiting season when there is an abundance of choice for sweet treats.

The Gorilla Genus is split into two species: Eastern and Western. Eastern subspecies are divided into Mountain Gorillas and Eastern Lowland (a.k.a. Grauer’s Gorillas), while the Western subspecies are comprised of Western Lowlands and Cross River Gorillas. These distinctions are largely based on their geographical regions, which have accounted for genetic distinctions over time.

Western Lowland Gorillas have the largest population of any gorillas, with an estimated 316,000 wild individuals as of 2018 according to the IUCN Red List. Other conservation organizations list more conservative figures around 100,000.

Western Lowland Gorillas are the smallest of the four subspecies, most closely related to the Cross River Gorillas. There are some recorded physical differences between the two subspecies, with crainium and dental size being the most notable. 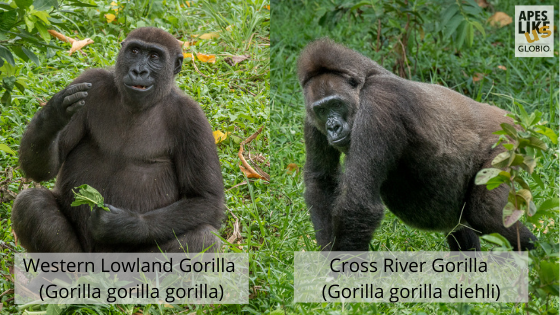 Western Lowland Gorillas are the smallest of the Gorilla subspecies, yet even they will reach over 500 pounds in captivity!

Males and females are sexually dimorphic – meaning there are clear physical differences between the sexes. Adult males can be as tall as 1.75 m, with an average of 1.6 m, with the females generally reaching 1.25 m if they’re particularly big. They have black fur covering their limbs, backs, and heads, with bald faces and chests. Western Lowland Gorillas often have lighter, more brown-tinged coats than other subspecies.

As with the cheek pads on older male orangutans, male gorillas will develop grey patches on their backs – referred to as “silverbacks”. Silverbacks are the alpha members of the troops and will determine the day’s events – such as foraging and eating, nap times, and moves to other areas within their territory, as well of course, as acting as the group’s protector. Typically, there will only be one adult male per group, although in some cases a younger male will remain in the group with his father. Might is Right is generally the case amongst Western Lowlands, with the silverback being the largest and most powerful in the group. When another male challenges the current reigning alpha, they will beat their chests, hoot and bark, and charge the offending male, even coming to physical fighting if necessary.

Western Lowland gorillas are quadripedal and will walk on closed-knuckles. They can stand up their two back legs to scan their surroundings and to intimidate their opponents but bipedal walking over long distances is very rare.

As strict herbivores, Western Lowland Gorillas eat vegetation – and lots of it! Preferring leaves, shoots, buds, roots, and flowers, Gorillas will move from area to area within their territory to munch away at nature’s salad bowls. They will also munch away at seasonal fruits when available and will often travel long distances as a group to get to an area that is ripening. They will occasionally eat insects but lean towards the greenery. Palm oil may have a bad reputation in the press but kernels from oil palm trees are favorite treats for Western Lowland gorillas!

Belches, grunts, singing, and screams are all part of a day’s chatter for a group of Western Lowlands. Like many other primates, different calls can signal dangerous situations or contentment and affiliation between individuals depending on the situation and the troop members who give them.

The infamous chest beat is used by the males to ward off intruders and intimidate opponents. With Western Lowlands, their open-handed chest beats sound more like “pok-pok-pok-pok”, higher-pitched than the movies may show. Younger gorillas, especially the toddlers may copy the chest beat as practice in play – but in these cases, it tends to be more endearing than intimidating!

Non-verbal communication plays a role in troop dynamics as well, however, grooming between individuals is less critical to the hierarchy as is the case in chimpanzees.

Like other ape mums, Western Lowland females are very dedicated to their bubs and will spend their first years close by their sides to teach them the ways of the forest and protect them from the dangers therein. Gorillas have no specific mating period and eligible adult females will mate with the silverback throughout the year until they become pregnant.

Western Lowland Gorillas have a gestation period of 8.5 – 9 months, with a single infant of about 2 kg being born. The young will stick close to his mum, relying on her milk for the first year at least, after which they will incorporate new foods into their diets – while still suckling from mum. Despite the care that goes into raising the young, there is a high rate of death among the young, increasingly due to illegal poaching, habitat loss, and the general dangers of living in the jungle.

In the event of a new silverback taking over, he may commit infanticide so that the females are ready to mate with him and produce his offspring.

Western Lowland Gorillas will most often stick in familial groups of 5-10 individuals, generally in a Harem Style social structure with one dominant male silverback and several adult females and their offspring.

Young adult males and females will travel to join other groups of gorillas, particularly troops in neighboring territories. This helps promote genetic diversity in regional populations and keep the species healthier on the whole. A small group of young adult males, called “blackbacks” and usually between 8-12 years old, may attach themselves to larger familial troops in hopes of mating with the females and integrating themselves into the larger troops.

When they are old and strong enough, a younger male will try to displace the reigning silverback. The younger one may challenge the silverback more and more frequently until the final fight which will decide the outcome. Once toppled, the formerly dominant silverbacks are generally forced to leave the troop and live out a solitary life in the forests.

As is common in the primate world, human activity is the main driver of population decline. Due to the variety and severity of threats, Western Lowland Gorillas are currently listed as “Critically Endangered”  by the IUCN, signifying that they are at high risk for species extinction without positive human intervention. Instances of wild predation aren’t well documented, although it is suspected that leopards and pythons may infrequently predate on infants.

Habitat loss is the main driver of population decline for all subspecies of gorilla. Especially in Equatorial Guinea, Cameroon, Gabon, and Republic of Congo, where they have the highest populations, logging operations – both legal and illegal – are rampant. Smaller troop sizes leads to more troop territories, which, when coupled with the sheer amount of foliage they consume every day, requires a significant amount of pristine forested area for the Western Lowland population as a whole. Logging operations reduce the amount of forest and can isolate populations by blocking access routes to different feeding areas.

In the wild, Western Lowlands are quite shy when it comes to humans and will steer clear of areas of human encroachment whenever possible. However, as logging, agriculture, and human populations rise, troops may have less choice over their encounters with humans.

As with other great apes, gorillas are highly susceptible to many human diseases – including Ebola, the common cold, and other respiratory viruses. Their susceptibility to Covid-19 is known but highly suspected. Ebola outbreaks in Republic of Congo have decimated smaller populations of Western Lowlands in the past, with its effect on larger wild populations unknown but suspected. Within the gorilla population, primate-specific diseases will also continue to have a higher transmission rate between troops as less forest area means higher overlap of individual troops.

Illegal poaching for both the bushmeat industry and the pet trade often go hand-in-hand. When a gorilla troop is targetted for poaching, often the adults are killed and sold off for their skins, bones, and meats to the black markets, while the infants may be passed on to be kept as illegal pets or illicitly sold to zoos and the entertainment industry. It is estimated that for each live infant on the market, multiple adults may have perished.

Conservation and the Human Community

Conservation initiatives for all gorillas must be undertaken at various levels and include a variety of stakeholders – especially local communities, conservation organizations, and government officials. With their current standing as Critically Endangered through the IUCN’s Redlist, as well as international legislation through CITES and local laws, all trade, possession, harm, and death to any gorillas are highly illegal. However, as is often the case, enforcement of these regulations is severely lacking as the corruption of officials is rampant.

Another major problem with conservation initiatives for wild Western Lowland gorillas is the lack of scientific information regarding their practices, behavior, and lifestyles. They are challenging to track and observe for primatologists and other conservation agents. There even remains major discrepancies with the agreed-upon number of wild Western Lowlands in the wild, with some organizations like the IUCN citing ~ 316,000 wild individuals, and others sticking with much more conservative figures. Extensive census’ and surveys are needed to determine more specifics of wild populations so that intervention strategies and techniques can be tailored regionally.

However, despite the shortcomings, it’s not all doom and gloom for these beautiful apes! Increasingly more community-based initiatives are coming to fruition, where communities self-police and monitor their local forests for illegal poaching and logging activities. Increased eco-tourism also helps incentivize environmentally friendly practices at a local level as tourists help stimulate local economies. However, given the present climate and gorillas’ likely susceptibility to Covid-19, tourism is currently at a standstill.

There are a handful of amazing primate sanctuaries that care for Western Lowland gorillas rescued from the pet trade and other horrific circumstances.  One of which is Ape Action Africa’s Mefou Primate Sanctuary, a partner of GLOBIO’s, who rescues a wide variety of primates – including gorillas, chimpanzees, and monkeys. They also partake in numerous conservation initiatives around Cameroon to help minimize negative human impact on their country’s amazing apes.

Western Lowland Gorillas have the highest numbers of any gorilla in captivity, a popular feature of zoos around the world with 500+ individuals currently in zoos, most of whom were bred through captive breeding programs.

Gorillas in the Swamps 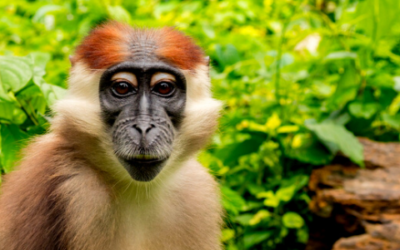 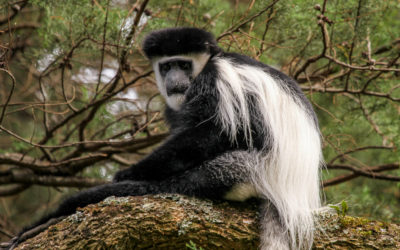 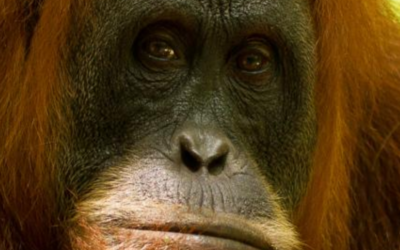