How do we change the conservation conversation around great apes and primates? When we went searching for new program partners to support our 2021-24 Strategic Commitment that was the fundamental question that drove our evaluation of potential partners. Tacugama Chimpanzee Sanctuary, in Sierra Leone, epitomizes a near-perfect partner, ticking every key box: saving chimps through rescue and conservation of critical habitat; education and awareness on both the village and ministerial levels; and a long-term strategic vision.

For the 95 rescued orphan Western chimpanzees that call the hilltop refuge home, living in a safe, secluded, densely lush, west African rainforest sanctuary might be enough, but Tacugama is and has been since its inception, much more than a chimpanzee rescue center. Driven by the vision of its founder Bala Amerasekaran, Tacugama is not about being solely a retirement home for victimized chimps. On that Bala is clear. He sees  Tacugama’s future as one synonymous 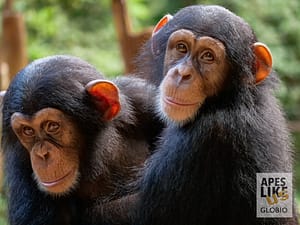 Orphan chimps continue to arrive at Tacugama Chimpanzee Sanctuary in Sierra Leone. Despite caring long-term for over 90 Critically Endangered Western chimpanzees, Tacugama increasingly aims it’s energies at the systemic cause of chimp loss — illegal poaching and habitat loss. To raise the chimps profile in 2019 Tacugama secure the highest profile possible for the apes — National Animal. The only nation to declare a great ape so valuable.

That larger vision, with eyes firmly fixed on the future, was critical to us as we looked for a partnership that could best put into practice what we believe needs to be done and what needs to be changed to positively influence the survival of great apes — in West Africa that is the Western chimpanzee and its rapidly vanishing rainforest. In Tacugama we have a partner that is hungry to create change. A partner for which doing the same old, same old is not good enough. GLOBIO and Tacugama both know same old is only going to yield the same old outcome, and for Western chimpanzees that means a further slide towards the precipice of extinction.

An estimated 5,500 Western Chimpanzees remain in the rainforests of Sierra Leone. Sadly, chimpanzee meat and orphaned babies are still highly valued in illegal markets, both inside and outside of the country. The root of the poaching crisis, Bala says, must be addressed through education and community-building. That has been at the heart of the long-term master plan over the past two and a half decades. Tacugama founder Bala Amarasekaran (in white) with park ranger and local resident reviewing the damage from 2017 landslide disaster. Heavy rains combined with deforestation on the steep slopes fringing the Western Area Peninsula National Park facing Freetown, near the Tacugama Chimpanzee Sanctuary, created an horrific disaster that buried over 1,100 people. (Above) Beneath the giant boulder the group is examining an entire three story home and residence were buried in seconds. In the aftermath of the disaster Tacugama played a critical role leading neighborhood recovery, making potable water available, establishing education scholarships for children orphaned, and communicating the critical nature of the National Park in safe-guarding the water supply and preventing erosion.

Partnering with Tacugama come at a pivotal point in both our organization’s history. In 2021 GLOBIO celebrates two-decades of education awareness and this year marks Tacugama’s 25th year. For Tacugama it is a quarter-century journey punctuated by making the Western chimpanzee subspecies, Pan troglodytes versus, the first great ape national animal in the world — alone a remarkable achievement — but also the species upon which a nation builds a foundation of valuing and responsibility for its natural heritage.

From the beginning, Sierra Leone has been an extraordinary country that optimistically embraced creating a new future. Born out of a return of free-slaves from America via Canada, and England in 1792, its capital and largest city, Freetown’s name reflects the hope of those original 3,000 emancipated slaves. The journey for an identity has been a turbulent road pitted with the potholes of political coups, disease (2015 Ebola outbreak), civil wars, and natural disasters. It’s in this cauldron of on-again off-again chaos that Tacugama was created in 1995 and has not only survived, but thrived — credit owed to its affably intense, optimistic, and determined founder.

Twenty-five years ago Bala, working with the Government of Sierra Leone, was allotted 40 hectares of land to be used as the country’s first and only chimpanzee sanctuary. Strategically, Bala located just inside the rainforest blanketed peninsula nearest Freetown: he wanted the chimp crisis to be seen.

Over the 25 years, Tacugama has become more than a chimpanzee rescue sanctuary.
“Everything [we do] starts with the chimps and transitions into wildlife conservation, research, climate change mitigation, advocacy, law enforcement, environmental education, ecotourism, youth and women empowerment, livelihoods and one health initiatives,”

Below, Saving Chimps: Tacugama Conservation was GLOBIO’s first short video with Tacugama through our Apes LikeUs program. The video has now been seen by over 30,000 on YouTube and inside Sierra Leone.

While rescuing and saving chimps is heroic on its own, Tacugama has not stopped there. On February 28, 2019, following sustained lobbying by Bala and his team, the President of Sierra Leone sent an

unprecedented message to the people of Sierra Leone and the world by declaring the Western chimpanzee subspecies, Pan troglodytes versus, the country’s National Animal and the new face of tourism. This declaration didn’t bring an immediate halt to illegal poaching of chimps, nor the destruction of their habitat, it did create an opportunity for Tacugama; an unprecedented foundation for heightening awareness and changing the attitudes of the people of Sierra Leone. It also illustrated to the world Sierra Leone’s seriousness in valuing its wildlife and natural heritage.

Sierra Leone is a critical biodiversity hotspot in the western African region, with some of the remaining wild populations of forest elephants and Western chimpanzees. Due to the diversity of landscapes, wildlife, and cultures, the country has a high eco-tourism potential. However, unless urgent action is taken to address poaching, illegal wildlife trade, deforestation and encroachment, the survival of natural ecosystems and wildlife is compromised. In absence of an effective strategy, the pressure on wildlife such as forest elephants and Western chimpanzees, as well as the red colobus, pangolins, turtles, and many other endangered emblematic species will irremediably increase and these species will disappear. Sierra Leone must, therefore, protect wildlife within and outside of the national protected areas, review policies and legislation, and empower the field officers to enforce the law and sensitize the communities.

As we look at the decade ahead it is clear all great apes face a crisis: each of the four non-human great apes, and in turn, their nine subspecies, are listed as Critically Endangered. Our 2021-2024 Strategic Commitment is to do more by supporting those on the frontlines survival. Tacugama and GLOBIO are dedicated to the survival and conservation of the Western chimpanzee and its habitat across Sierra Leone.

“None of us have figured this out — how to save species and habitats, how to make that work longterm, and how to make it permanent. If we had, partnerships like this wouldn’t be critical. But through this new partnerships we (GLOBIO) and Tacugama have committed to take that journey together.” emphasized Gerry Ellis, GLOBIO’s Executive Director, “And I’m certain what we create in Sierra Leone will benefit chimps and people there and become a model for great ape conservation elsewhere. Losing more apes is no longer an option. Already chimps are gone from four of Sierra Leone’s neighboring countries.”  Changing attitudes about chimpanzees begins with awareness and education. GLOBIO is working with Tacugama to create powerful visual stories, and multiple outlets and platforms to share those stories. We all believe this partnership will play a dynamic role in the future of Sierra Leonian conservation.

Look for continued updates on our developing partnership with Tacugama Chimpanzee Sanctuary and for more details about them check out the Tacugama website.