The Landcruiser pulled into the drivers’ back parking area behind the lodge at Kechwa Tembo in Kenya’s Maasai Mara, the afternoon was hotter than normal and everything worth filming seems to be asleep, so we were going to cash it in for a few hours — taking a rare afternoon off.

Joseph pulled to a stop, tugged on the handbrake, and simultaneously a dozen fingernail-sized fig fruits showered me through the open roof. “Someone awake, bwana”, Joseph said through a smile. Joseph and I had been together nearly ten years, I knew he only called me “bwana” when he was taking the mickey out of me. A couple of meters above the vehicle a half dozen red-tailed guenons were dancing in the canopy. Joseph already was fetching the tripod from the back, after a decade, he knew. He had seen that look in my eye, he knew right then he wasn’t getting the afternoon off. 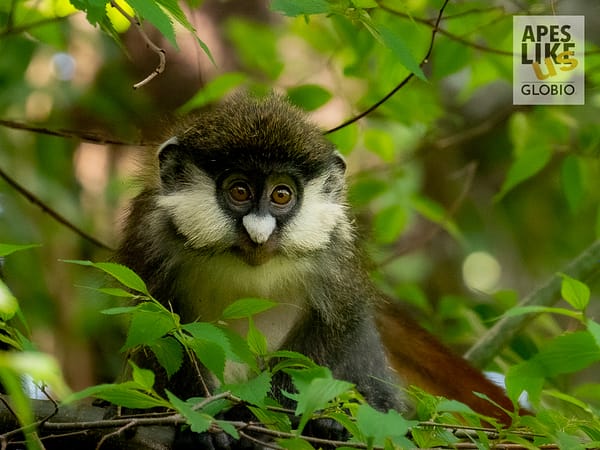 I spent the next several hours filming and watching the guenons – red-tailed or Schmidt’s guenons are maybe one of the cutest creatures imaginable. Not just for their bright face and the unmistakable “milky chops” they sport with incredible panache, but also for what they have to say. In the years since that afternoon in southwest Kenya, guenons have become one of my favorites. Alongside red-tailed are the putty-nosed guenons for taking the cute and curious award. As their name suggests, putty-noses have a button of creamy-white dabbed on their tiny hint of a nose. But like red-tailed, putty-noses are cute beyond their looks, it’s their chortling, squeaky, questioning voices that charm the socks off you. It’s not hard to see why guenons are one of the most illegally-trafficked small African monkeys.

Fruits, Forests, Focal Regions and the Need For Monkeys

Generally small, monkeys often slip through the branches of the world’s tropics unnoticed compared to their larger ape cousins. An amazing feat when you consider they make up 87% of the primates on Earth. The role of primates as seed dispersers has been observed throughout the tropics: in Latin America, in Asia, and in Africa. How a plant spreads its seeds and how far are key to its survival. Some species rely on wind or water to disperse their seeds, but for trees in the tropics, animals often play a critical role. Primates, in particular, are one of the most important seed dispersers in tropical forests

In 2020 we began implementing a new strategic plan for GLOBIO. At its heart were four Focal Regions where we determined our work could have the greatest impact: Peat Swamp Forests (Borneo), West African Lowland Rainforest, Western Congo Basin Forest, and Upper Albertine Rift Triangle.

Critical to the Upper Albertine Rift Triangle is Uganda’s Kibale Forest National Park. For the past two years, we have had it on our Travel with GLOBIO primate program. Exposing more travelers to the magic of monkeys is critical to our mission. Primate researchers from around the world also travel to Kibale for its primate richness. For the past 17 years, anthropologist Joanna Lambert has been studying seed dispersal in the park.

“What I’ve found is that depending on the species of tree and the fruit that’s being consumed,” Lambert said, “primates are responsible for 78-92% of the removal of the seeds,” Lambert points out that, the monkeys and chimpanzees of Kibale move an astonishing 34,000 seeds in a square kilometer in a day. And many of those seeds grow into trees used by local people for fruit or for medicinal purposes. According to Lambert, 42% of the fruit species dispersed by primates in Kibale have resources that are used by people.

According to the International Union for Conservation of Nature (IUCN), close to one-third of the world’s primate species are in danger of extinction. In Asia and Latin America, tropical forest clearing for human settlement, agriculture (principally palm oil), and commercial logging are destroying primate habitat. In West Africa and the western Congo Basin, hunting is largely being driven by demand from urban markets. Known as “the bushmeat trade,” the commercial hunting of primates and other wild game species has eliminated all but the smallest mammals and birds from the forests. As the cute chortling voices of monkeys like guenons disappear a phenomenon scientists call “Silent Forest” sets in. The long-term impact of these missing voices – the critical seed dispersers – is still being hashed out.

I have to admit part of my newfound fascination with monkeys comes in part from GLOBIO’s Programs Director, Meg Stark – her passion for monkeys borders on something close to an obsession, and her joy about them is infectious. Meg worked for nearly three years at the Vervet Monkey Foundation in South Africa. There she rescued, nursed, and mothered dozens of vervet monkeys. The vervets arrive at the sanctuary after some torturous encounters with farmers and others who see the diminutive vervets as pets or pests. In any case, what’s seen in South Africa is no different from other countries: it’s the wild monkeys that suffer. Vervets, like many monkeys in the world, are not protected and typically fall on the losing end when in conflict with humans. 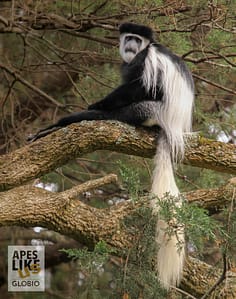 Mantled Guerezas, also known as Black & White Colobus, are as majestic as the red-taileds are adorable.

On the edge of the Kibale Forest National Park is the Bigodi swamp, part of the Bigodi Wetlands Sanctuary. Bigodi has become a prime destination on our Travel with GLOBIO trip in the region. It is home to an extraordinary array of monkeys: the red colobus monkey, baboon, mantled guereza, blue monkey, grey-cheeked mangabey, vervet monkey, red-tailed monkey, and the L’Hoest monkey. The Bigodi Wetland Sanctuary is a great example of a community-based approach to natural resources management which can be of good economic benefit to the different local residents living within this area plus the Uganda safari industry as well. Most travelers see the swamp on a half-day detour from seeing chimpanzees in Kibale. The truth is the nine species of primates generally seen in Bigodi are worth a day of their own. In designing our Travel with GLOBIO Uganda trips we have ensured the monkeys of Bigodi get their just attention.

After a decade of filming in the tropics, that afternoon in Kenya I discovered myself in the spell of these little primates, a kind of monkey magic, and now every journey I make has monkeys somewhere, somehow, on the itinerary.

Interested in Traveling with GLOBIO? We have trips to explore the apes and monkeys in late 2021 and in 2022. Find out more HERE or contact Meg@globio.org.