Chimp Thoughts: World Chimpanzee Day & The Day I Thought Jane Was Going To Kill Me

Oh my god, I just hit Frodo in the head with my camera — Jane is going to kill me!

It was self-defense… it was self-defense… I kept repeating in my head, trying to make it sound acceptable to the most famous chimpanzee researcher on the planet. I knew I had to tell her. I also worried it might be my one-way ticket on the water taxi out of there in the morning. 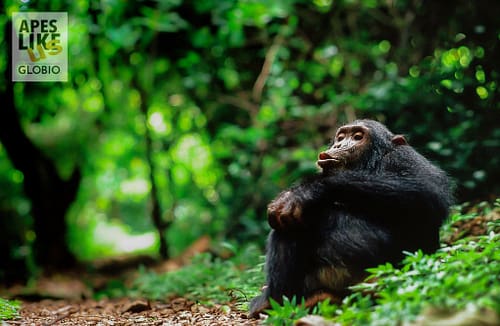 As I walked back through the Gombe forest to the shore of Lake Tanganika I kept searching my brain for additional supporting reasons justifying why I would do such a thing. Self-defense, that was my only excuse — Frodo charged out of the blue and bam! eight pounds of camera, battery pack and motor-drive planted into his forehead, halting his advance.

After the afternoon thunder rainstorm I caught up with Jane, I started with, “Have you ever had issues with Frodo?” Before I could utter another word she asked “Are you ok?” Frodo’s aggressive personality had apparently preceded me out of the forest by years. Jane was neither shocked or surprised. I explained over dinner that night the whole event in the meadow and Jane filled in the gaps with details of his cheeky behavior over the years. Frodo and Jane had their own history.

That would not be the last thing I would ever do at Gombe Stream with chimps that Jane had never done. A few days later I asked her about being up in the trees with the chimps and she gracefully said she had never tried, I was welcome to give it a go, but be careful, they are faster, stronger and more agile than you up there. The next day I did and out on a horizontal 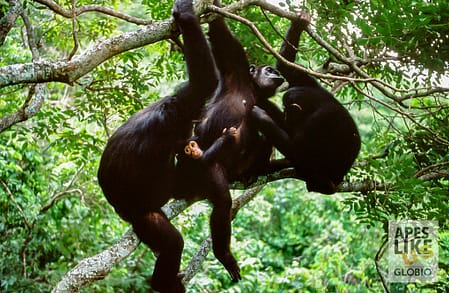 Chimpanzees family grooming in treetops – mom Fifi in the center with her newest baby at the time (1991) Faustino peaking out from the safety of her hip; Gombe Stream NP, Tanzania.

fig-tree branch 45 feet above the forest floor I had one of the lasting memories of my chimpanzee lifetime. A tiny Faustino was only 18 months old but in chimp terms old enough for an experienced mother like Fifi to feel secure both at allowing Faustino to explore such heights and be curious about this unlikely white ape climbing about with them in the treetops.

One evening having dinner on the beach at Gombe, Jane said, “if I had not studied chimps, I would have studied the other most interesting ape.” She was referring to humans. She added, “but I don’t think they would have been comfortable with me sitting in their living room taking notes on their behavior.” I chimed in with “I don’t think they would have been comfortable with my cameras either.” It was that evening I realized how much Jane saw chimps differently, they were familial. That was a gear shift for me from that point on. Over the past few decades, I have seen chimps, both in the wild and in sanctuaries, on dozens of occasions, and in each case, I see them now through familial eyes. From orphaned babies in Cameroon — young lives shattered from the bushmeat poaching trade — to wild chimps in the Kibale Forest of western Uganda, I see their individualities, and I see their individual roles in the dynamics of their family groups. I’m lucky enough to sit in their leafy-green living rooms and take my visual notes.

Seeing chimps as individuals has been amplified since I began filming orphans babies in ape sanctuaries for Apes Like Us. Beyond the incredible sadness seeing the wave after wave of tiny motherless, family-less chimps arriving at sanctuaries, witnessing the individual struggles and success of these developing little lives illustrates their individuality. When we think about raising awareness about threats they face in the wild including habitat loss, disease, and wildlife trafficking and promoting their proper care in captive situations, seeing them as individuals rather than an amorphous hairy group is critical to any hope of ensuring their survival in the wild.

ALL IN THE FAMILY

Jane’s findings suggest that many behaviors once thought to be exclusively human, may have been inherited from common ancestors that we shared with chimpanzees millions of years ago. The more we discover about these kindred beings, the deeper our insight into what it means to be human.

Chimpanzees, the Pan troglodytes group, are at once fascinating, frustrating, and frightening, more like filming us humans than we would like to think. Filming them since those first days at Gombe has taken me across the woodland savannas and tropical rainforests of Equatorial Africa, from the shore of Lake Tanganika in the east to the humid tropical rainforests of Sierra Leone in the west.  What we have learned and continue to learn about chimps keeps me venturing back into the tropics:

Chimpanzee tool-use, “fishing” for termites was first observed by Jane Goodall at Gombe Stream in Tanzania. The discovery inspired Anthropologist Louis B. Leakey in response to declare, “Now we must redefine ‘tool’, redefine ‘man’, or accept chimpanzees as humans.”

July 14th celebrates World Chimpanzee Day, the date chosen to acknowledge Jane Goodall’s arrival at Gombe Stream, and the impact she would eventually make on chimpanzee research, primate conservation, and the world.  She stepped ashore on the fourteenth in 1960 in hopes of doing what no one had previously done — discover the behavioral missing-link between us ape cousins. The impression Jane made in the beach sands at Gombe would over the next decade leave an indelible mark on primatology, recasting the image of all human and non-human apes. The Pan family, chimps (Pan troglodytes) and bonobos (Pan paniscus), have continued to surprise, reaffirming the hope Dr. Louis Leakey had when sending Jane to the lake.

The founding organizations for World Chimpanzee Day aim to empower communities everywhere to take action on behalf of chimpanzees to ensure a secure and hopeful future for this magnificent species.